Oscar Dragonia (オスカー・ドラゴニア, Osukaa Doragonia?) is a major antagonist in Tales of Berseria. He is an anti-daemon, praetor-rank exorcist of the Abbey and encounters Velvet Crowe on several occasions. He is the younger, half-sibling brother of Teresa Linares and serves under Artorius Collbrande, first encountering Velvet as she tries to flee from Titania, the prison island.

Oscar is a first-class graduate of the distinguished nobility, the Dragonia house. However, his parents only ever paid attention to his elder brother, the heir to the Dragonia family. His elder, half-sibling sister, Teresa, has served as a motherly figure to him from a young age. Ever since being protected, he has worked his way up to be an asset to his older sister, who has always been a supporting heart in his life. Oscar eventually comes across Velvet and Seres trying to escape the prison, he then fights them. However, Velvet is able to overpower him and causes him to lose one of his eyes. Later in order to gain more power he becomes an experiment for the armatus. He gains considerable power, and comes to fight Velvet again. After he sees that they hurt his sister he loses control which forces Velvet to kill him.

Oscar has premium-blond hair, light skin, and green eyes. He has a fairly tall build and neat hair, with some hair strands flicking out. His outfit consists of the standard exorcist uniform: a long white cape with blue as an inverted color; white and golden top and shoe gear; black pants; and long white gloves. He wears a belt, in which carries his sword within its sheath. Personality-wise, Oscar is a cool, rational type of character. Even when in a life-threatening situation, he always manages to remain calm. This personality had always been one of his assets in battle, for the sake of his people and protecting the world from evil. However, he believes that everyone in life has a role to play, no matter how much others are against it.

Oscar's class is that of a swordsman and first-class daemon executioner, otherwise known as a praetor. He fights with a flat-end sword, not hoping to do any unwanted damage, but knowing how to control a serious situation. In his human form his artes resembles sword-based artes from previous entries in the series, their Japanese names being often English synonyms for their English-localized names, for example "Heavenly Torrent" is based on Sorey's Heavenly Torrent, but is called Rising Blast (ライジングブラスト?) in the Japanese release. He also has malakhim in his service. These malakhim act as a vanguard, protecting him from minor threats, as he still holds some value in their lives not to have them injured. As Failed Oscar (未完成神依オスカー?, "Unfinished Armatus Oscar"), he armatizes with a wind malak, retaining Wind armatus hidden artes from Tales of Zestiria; he gains a mystic arte called Sylphid Blaze in this form.

In Tales of Zestiria the X, Oscar arrives to Titania on a ship and fights Velvet and Seres on the docks. Oscar demands Velvet to return to her cell to continue devouring daemons, as part of her role in maintaining world order. Enraged, Velvet asks if being a sacrifice was her brother's role, to which Oscar replies "exactly." Suddenly, a dragon appears and attacks. During the fight, Oscar realizes that Velvet has devoured Seres as the therion moves in to devour the dragon. Oscar attempts to stop her with an arrow of light to the shoulder, but this proves ineffective as he is caught in an explosion while Velvet consumes the dragon. 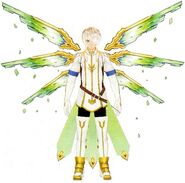