Patty Fleur (パティ・フルール, Pati Furuuru?) is a new protagonist introduced in the PlayStation 3 port of Tales of Vesperia. She is capable of using guns and is even equally skilled at wielding a knife. She is a young pirate girl looking for the lost treasures of the legendary pirate Aifread. Another of her goals is to recover her memories. Rumor has it that she is Aifread's granddaughter.

Patty is first seen in Capua Nor, walking toward Ragou's manor, only to be grabbed by one of the guards at the door. She is then tossed aside, only to be caught by Yuri Lowell. When the merc points his sword at her, Patty throws a smoke bomb and runs off. Yuri grabs her hand, only for Patty to leave behind a Cast-off Doll and break into the manor.

Patty has light skin, blue eyes, and blond hair braided into two ponytails tied with purple ribbons. Her attire is reminiscent of a ship's captain, consisting of a pirate's hat, a matching coat, and boots. She also wears a pair of binoculars around her neck. Patty is a young girl with no memories of her past, and seeks to recover them by finding the legendary treasure, the Maris Stella.

At first she has a very childish personality, making jokes and irritating characters. However, she has suffered constant discrimination due to Aifread's involvement in a massacre. This results in her being distant at certain times. After she finds out about her past and her long lost friend, Seifer, she gains a more serious attitude. She has a crush on Yuri that she makes no attempt at hiding, and great admiration for Flynn Scifo. She loves cooking, and even has a few exclusive sidequests related to it.

Patty's gameplay revolves around fighting stances, referred as "Forms", which affects how her normal attacks and Artes operate, as well increasing her physical or magical power depending on which form she is using. This makes Patty the character with highest number of variety in attacks in the entire game. Most of her passive skills are focused on improving the performance of her forms; she also has two skills that reflect her feelings for Yuri and respect for Flynn, increasing her performance in battle when they are in the party.

Patty's mystic arte is called Summon Friends, where she can summons characters and monsters to help the party during battle, like Mieu, who can breathe fire, and Quickie, who recovers TP and OVL. Many of her techniques and spells are based on chance, though certain skills and actions can lower risk of negative or unwanted effects.

In Tales of Crestoria, Patty is first seen arguing with Chat over Aifread's legendary treasure rumored to be in Centerport. Soon enough, a whole armada of pirates arrive at the beach. The two kids quickly start defeating the pirates after being insulted by them. During the skirmish, Vicious confirms that the rumor was false, much to their dismay. 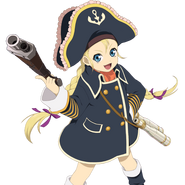 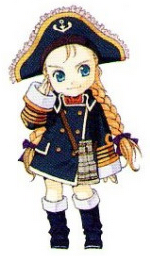