View source
watch 02:40
World of Warcraft: Dragonflight - The Loop
Do you like this video?
Play Sound

Emperor Peony Upala Malkuth IX (ピオニー・ウパラ・マルクト九世, Pionii Upara Marukuto Kyuusei?), known more commonly as Peony IX, is the reigning monarch of the Malkuth Empire, who appears as a major supporting character in Tales of the Abyss.

Before the events of the story, Karl V (カール5世?), Emperor of Malkuth at the time, had four noble concubines, and Peony's mother was the one with the lowest status. Emperor Karl also had three sons and one daughter, none of them sharing the same mother, and all but Peony died in a struggle for the throne of Malkuth. The Closed Score predicted that Peony would rule Malkuth, which is why his father kept him confined in a manor in Keterburg, far from the political turmoil of the capital, Grand Chokmah. At his new residence in Keterburg, he rarely had any opportunity to leave the mansion to play with the other kids of Keterburg. Despite his closely guarded childhood, he was able to befriend Jade Curtiss, Nephry Osborne, and Saphir, fellow students who attended a private school with him under Professor Gelda Nebilim. Peony himself claims Nephry was his first love.

Years later, as the current Emperor of Malkuth, Peony assists the party in trying to achieve a lasting peace with the rival country of Kimlasca. Both he and King Ingobert VI of Kimlasca conclude all military aggression from their respective nations through a peace treaty, signed in the neutral grounds of Yulia City. Following the signing of this treaty, Peony grants the party permission to use a secretly developed flying machine known as the Albiore to help them evacuate residents from Engeve and Sheridan and transport them to Chesedonia after preventing the town from falling into the Qliphoth.

Tales of the Rays marks the first time in the series' history where Peony appears as a fully playable character, as opposed to Tales of Asteria where his units are of low rarity and use the simple Stone Blast arte. He is a martial artist as he is shown to be a master in hand-to-hand combat in Tales of Fandom Vol.2 and his artes are derived from already existing ones, with their names generally differiating in a single kanji character and more or less altered execution, yet still fairly similar to the base one from which they are based on. 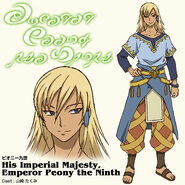 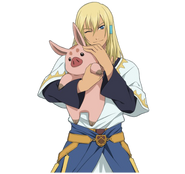 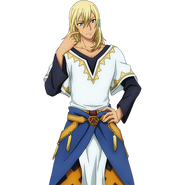