Pierre de Chaltier (ピエール・ド・シャルティエ, Pieeru Do Sharutie?) is the Swordian of Earth, containing a copy of the personality of the 2nd Er'ther Army Squadron Leader, Major Pierre de Chaltier. During the events of Tales of Destiny, he is wielded by Leon Magnus.

Chaltier has been with Leon's side since he was a child and enduring his hardships under Hugo Gilchrist's insanity, possibly as the only figure Leon could call "best friend". He specializes in short-ranged combat, but also possesses several Earth-based magic and some Dark magic as well. Chaltier is a very restrained individual, but very loyal even if he did not like the order, that he would follow his master, referred to as "Young Master" in the English version or "Bocchan" in the Japanese script, to death, even if it means betraying his fellow Swordians. According to his diary, found in the past time line of Tales of Destiny 2, he has been ostracized by his peers, and wants to become stronger to show that he is not stupid. He is mostly referred as "Chal" (シャル?) by Leon. 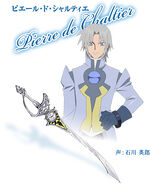 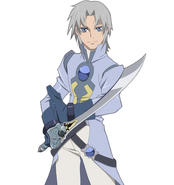 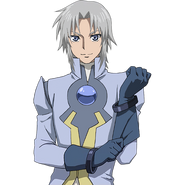