Pluto (プルート, Puruuto?), also localized as Brute, is the King of Daemonium, as well as a Spirit. In most games, Pluto appears as the "King of the Underworld". He can be summoned to battle through the Pluto arte.

Pluto makes his first appearance in the PlayStation remake of Tales of Phantasia as an optional Spirit. Since the PlayStation version, Pluto has appeared in future versions of the game. In the PlayStation and Full Voice Version, he appears in the lowest level of Morlia Mineshaft and requires the "Emerald Ring" to form a pact. In the Game Boy Advance version of the game, he is instead found in the last level of the Dwarven Temple, requiring the "Lapis Lazuli". Pluto appears as a legless beast with long arms. Pluto challenges the party and, once subdued, he forms a pact.

Pluto battles in the PlayStation version with his pet "Cerberus" and alone in the Game Boy Advance version. He surrounds himself with infernal flames to ward away enemies, which he can also fire forward, as well as reach up from the ground with dark hands. He can also cast high-level spells such as Earthquake and Black Hole.

Pluto makes an appearance in Tales of Eternia through the Summon Pluto arte only available to the final boss. He is not one of the Greater Craymels of the game, lacking their distinctive summon. 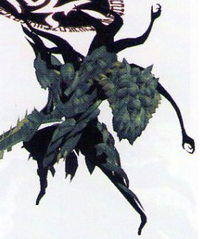 Pluto is the Great Spirit of Eternity and the Ruler of the Underworld. She was sealed by Maxwell long ago but could break free at any time. She currently incarnates as the shrine maidens Tess (ティース, Tiisu?, "Tīs") and Patel (パテル, Pateru?, "Pater") at the Xailen Woods Temple, with the Azure and Crimson Servants working beneath her. In Tales of Xillia, she is content to simply be Tess and Patel, only summoning the Azure and Crimson Servants if all of the Mysterious Jewels are brought to the temple.

In Tales of Xillia 2, she calls Ludger Will Kresnik and Milla Maxwell to her to test their worthiness to face Chronos, as she is too enamored with the current state of the world to let it end so easily and intends to go face Chronos herself if the fight goes poorly. Once beaten down, Pluto reveals herself as laid back and enjoying her current incarnations. She returns to the Underworld and invites the group for a rematch in the future, except on her terms.

There is an inconsistency with Pluto's name in the English localization of Tales of Xillia 2. While character dialogue and enemy information refer to her as Pluto, her own dialogue box erroneously gives her the name of Brute.

Pluto appears in Tales of Phantasia: Narikiri Dungeon as the King of Daemonium and one of the twelve Spirits that must be fought during the Ordeal of Spirits (せいれいのしれん, Seirei no Shiren?). He is found on the last level of the Cave of the Demon King in AC. 4354 and is the boss of the dungeon. Upon defeat, he teaches Mell and Dio about Fear (きょうふ, kyoufu?) and Desire (よく, yoku?).[1]

Pluto appears in Tales of the World: Summoner's Lineage as a unit Fulein K. Lester can summon.