QQ Selezneva (キュキュ・セレツネワ, Kyukyu Seretsunewa?) is a newly-introduced character in Tales of Innocence R. She comes from a different world, claiming to be an archaeologist curious about the world of Naraka.

In the world to which QQ and Kongwai Tao belong, the adventure of Ruca Milda and his companions is well-known as a legend. It is believed, however, that the world to which Ruca belongs actually exists. Many have attempted to travel to this world, but no one has ever returned. QQ and Kongwai later become the first to return from this world alive. The two enter from what is known as the Triverse Gate and are capable of speaking in a Triverse language that is foreign to the other protagonists.

In a secret cutscene obtained only after clearing the Triverse Gate in Tales of Hearts R, Gall Gruner enters the Triverse Gate and emerges to another world, where he is greeted by QQ and soldiers, dressed in military outfits. He gives them the Soma he carried, calling it a souvenir from his travels.

QQ dresses in a scantily-clad ensemble of lime green articles of clothing, including a bikini-style suit, gloves, and boots. She bears a majority of her skin, which is accented in exotic yellow tattoos. In addition, a long yellow sash is draped around her neck like a scarf and trails down to her feet on both sides. She has silver hair and brown eyes, with one eye concealed by a black eye patch. QQ has an innocent, friendly personality and makes a habit out of hugging others when she is happy. A keen fighter, her wounds serve as symbols of pride for her.

QQ frequently interacts with Kongwai, with whom she shares a seemingly friendly relationship, like everyone else. However, when their talks in the Triverse language are translated into Japanese in the second playthrough of the game, it is shown that strong enmity exists between the two, who belong respectively to two countries that are at war with each other back in their own world. Before returning to their own world, Kongwai declares the end of the "friendship game" with QQ, to which she responds with a resolution to kill him the next time they meet.

QQ fights wielding a spear. Whereas Kongwai is a purely offensive mage, QQ's arteset consist of using the spear as well as her own limbs. Out of everyone in the party, QQ has the shortest arteset.

Cut-in image for Imperial Spear in Tales of Innocence R.

Cut-in image for Infinite Rondo in Tales of Innocence R. 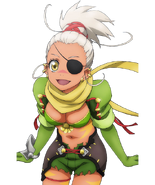