Randgriz (ランドグリーズ, Randoguriizu?) is the Sacred Beast of Earth in Tales of Rebirth. He is an elderly, tortoise-like beast with a scholarly, sage-like appearance.

Randgriz is one of the six Sacred Beasts, known as the "Six Saints", who served the Sacred Beast King, Geyorkias, long before the events of the story. Each Sacred Beast possesses an arcane power, Randgriz's being Earth. At some point in the past, the King and his Six Saints came into conflict over opposing ideals: Geyorkias believed they should eradicate all Huma from the world so that the racism and hatred between them and their fellow race, the Gajuma, would cease, as Huma had undergone a marked cultural development and waged war against the Gajuma in an attempt to subject them to the Huma's rule.

The group has a difficult time finding Randgriz, having been told by the Sacred Beast Gilione to find him on the "Island of Illusion", unaware that this island is actually the city of Sannytown. Observing an ancient map, the group notices how Sannytown is absent, leading them to believe that it is the elusive Island of Illusion that has been reported to float. In Sannytown, Randgriz speaks to them and introduces himself after transporting them to an unidentified shrine. He explains that what they see is merely is spiritual body, as his actual body became the foundation for Sannytown long ago.

The group is shocked to learn that Randgriz himself is the Island of Illusion, having swam the oceans of Calegia and been noticed by humans when his back protruded from the water. Randgriz then speaks with Eugene Gallardo privately, recognizing that this is his trial. When the trial begins, a number of phantoms appear before Eugene, each manifestation exaggerating their actual counterparts' words concerning race. Some encourage Eugene to take pride in the notion that Gajuma are the "superior" race, while others berate Eugene for being of the "inferior" race. A phantom version of Eugene accompanies each of these other phantoms in stressing these conflicted emotions to Eugene, forcing him to justify his beliefs in order to maintain his sanity.

When Eugene's resolve weakens, Randgriz confronts him about his "vacillating" heart, which prompts Eugene to admit that, due to the impression, he harbors a hatred for Huma. However, Eugene explains that animosity toward others is merely human nature, but that one's heart has the power to overcome such negative sentiment and establish bonds, which transcend race, with others. Randgriz accepts Eugene's speech as a passing of the trial and bestows upon him the power of Earth. Randgriz then explains the Sacred Beasts' history with Geyorkias to the group and informs them that they may now take action against the impression. 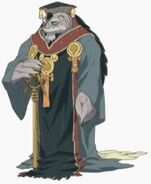 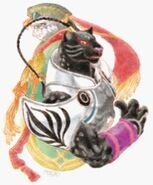 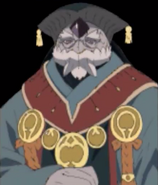