Regal Bryant (リーガル・ブライアン, Riigaru Buraian?, "Regal Bryan") is a protagonist in Tales of Symphonia, and is the last member who joins the group.

A very serious convict sent by the Pope of Tethe'alla to capture Colette Brunel, the party first meets him at the Meltokio Sewers after defeating minor convicts. He gets a hold on Zelos Wilder and says that if they made a move, he would kill him. Presea Combatir comes forth and manages to save Zelos, and when Regal sees Presea, he becomes stunned. Genis Sage uses the chance to attack the man with Fire Ball. Regal then retreats together with the other people. The next time Regal shows up is in the Gaoracchia Forest. He assures the party that he is not going to take Colette for the moment; he just wants to talk to Presea. Genis is angry at the statement, but lets Regal do it. When Regal sees Presea's Exsphere, he gets angry and attempts to take it off, but Presea hits him away. The party takes this as a warning and fights him. Upon his defeat, Regal passes out, but is far from dead. He is carried by Colette to Mizuho. When waking up, he helps the party when Zelos says that since he wants to talk to Presea, he would have to stick with them without doing anything funny; Regal agrees.

While traveling, Regal shows to know a lot of things that few people do. This makes Zelos suspect Regal for being much more than just a convict, as he also remembered having met him somewhere before when he was little. When Regal learns that the group knows that Presea's sister Alicia Combatir was killed by the one she served, he requests them to take him to Altamira, a place he has avoided until now. They then see in Altamira that Bryant's assistant, George, is threaten by the Exsphere broker, Vharley. Regal saves George by revealing that he is actually the president of Lezerano Company who has been absent for many years, Duke Bryant.

When Vharley disappears with the help of Kuchinawa Azumi, Regal tells the group his real identity, and Presea then understands that Regal was the one who killed Alicia. They go up to the terrace where Alicia's grave lies, and her spirit comes forth once again and expresses her happiness that she could meet her master one last time. She and Regal then tell the others that they were in love, but because of their cast-differences, George split them apart by giving Alicia to Vharley for the Angelus Project. Regal was forced to give Vharley the Toize Valley Mine in order to get Alicia back, but by then, Alicia's Exsphere had already caused her mana to go out of control. Thus she had transformed into a monster, attacking everybody she saw, Regal included.

Begging him to kill her before she killed him, Alicia died by the hands of Regal, much like the events which occurred between Kratos Aurion and Anna Irving. After killing Alicia, Regal handed himself over, and was put into jail. However, the Pope promises him that if he can capture Colette and bring her to him, the Pope then will arrest Vharley for him. This is the reason behind his attacks on the group before joining them. Presea says that she cannot forgive him even if Alicia wants it, but she will try not to see him as an enemy.

If Lloyd has the highest affection with with Regal by the end of the game, Mithos will possess Regal and take his body to Derris-Kharlan, where he is eventually saved by Lloyd. Afterwards, the two go off to find their friends in Welgaia. If someone other than Regal is Lloyd's closest companion by the end of the game, Regal will disappear into the Derris Emblem and wind up in a cell along with Presea. However, the cell door opens, and when they go out, they see the illusion of Alicia there. Confused, the two group-members are about to fight each other, because one thinks that Alicia is a fake while the other thinks otherwise, but Lloyd comes and stops them, injuring himself. After that, Regal then accepts his past and decides to help Lloyd all the way. If Regal has the highest affection level by the end of the game, he journeys with Lloyd to collect the remaining Exspheres once Mithos is defeated.

Regal returns in the sequel to Tales of Symphonia, which occurs two years after the main story. He is found in Izoold, where he is once again in prison. He had come to town and was speaking with a gel salesman named Berg, when he was suddenly caught in a bright flash of light. When he regained consciousness, the building was in flames, and Berg was unconscious. Regal got Berg out safely, but was accused of starting the fire and imprisoned. It is later revealed that that a "Nazdrovie", or "Light Frog", was responsible for the fires, and Emil Castagnier, Marta Lualdi, Genis Sage, and Raine Sage go to Cambodia Caves to find a cure. They succeed, and after Berg explains everything, Regal is set free. If Regal is selected in the Iselia/Flanoir scene, Lloyd will reveal that he has been traveling with Regal for the past two years and intends to journey with him once more when the current conflict is over.

Regal wears handcuffs to symbolize his crime and promise that he will never use his hands to kill again; thus, he chooses to fight with his feet. He is a fighter, supplementing his melee capabilities with a small amount of chi magic, such as Healer and Grand Healer, similar to Farah Oersted from Tales of Eternia. He fights exclusively with his feet, and uses greaves to enhance the power of his kicks. Before donning his trademark shackles, Regal mainly fought using his hands, and his strength and mastery of this previous style far surpasses those of the Traubel style he uses throughout the game. His battle style is a departure from the rest of the characters, who have a base-master-arcane style. Instead, he possesses arte chains, again, much like Farah, which are split up in terms of function, such as anti-air or air-based artes, rather than overall power. 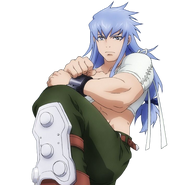