Aselia Wiki
Register
Don't have an account?
Sign In
Advertisement
in: Tales of Eternia characters, Spirits, Tales of Legendia characters,
and 2 more
English

Rem (レム, Remu?) is the Spirit of Light, one of several spirits who represent Light. Rem has appeared in several games of the series as a character or cameo, and she is able to be summoned through the Rem arte. Rem is opposed by Shadow, the Spirit of Darkness, and shares the element of Light with Luna and Aska. In Tales of Rebirth, Rem is replaced by Gilione, the Sacred Beast of Light. In most games, Rem typically appears as an angelic woman.

Rem makes her first appearance in Tales of Eternia as the Greater Craymel of Light, governing use of all Light-elemental spells, and is the Governing Craymel of Inferia with dominion over Sylph, Undine, and Efreet. She first appears when the Primary Craymels of Inferia are gathered, stating that because humans caused the Grand Fall, humans can fix it themselves. Nonetheless, she gives them the Sorcerer's Ring and tells them to cross the Bridge of Light. She is found again in the Regulus Knoll, where she guards the place where Nereid was sealed and where they party goes to obtain "Ribavius Ore". Once defeated, she enters the Craymel Cage. Rem can be summoned through the arte Rem.

In battle, Rem has the ability to fly across the screen to dodge attacks. She prefers to use thin beams of light as attacks, and she battles with an autonomous orb of light that can damage and repel attackers. Rem can use Light-elemental Craymel Artes, such as Ray, Holy Lance, and Prism Sword, and when she casts a spell, she is surrounded by white aura that can repel physical attackers. She also has an exclusive spell called Shining Flare (シャイニングフレア, Shainigufurea?), which rains holy light over the affected area. 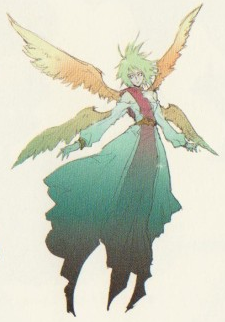 Rem appears in Tales of Legendia as one of the Summon Spirits. She appears as an angelic women with golden wings. Rem makes her first appearance at the end of Jay's character quest as a glowing ball of light only Grune can see. Acknowledging the role the immaturity of the world has on both Grune and her power, she turns into seed form and rests in her urn. After the party defeats Schwartz in the Cradle of Time, Grune plants Rem's seed at the Altar of the Sea. After Grune says goodbye to the party, Rem emerges from her seed in front of the entire party. Due her her nature in other games, Rem is associated with the Sea element, which has holy connotations in context with the importance of the sea in the game, in the same way that light has in most other games.

Rem is mentioned in Tales of the Abyss as the aggregate sentience of the Sixth Fonon, the Fonon of Light. Her name is used to represent the first day of the week, Remday, and the first month, Rem Decan. Based on the other months, the first month being named after Rem would normally mean that the twelfth would as well, but Luna occupies the spot with Luna Redecan. Despite this, only Rem is named the sole aggregate sentience of the Sixth Fonon. In addition, the Tower of Rem is named after her, and Rem is also the name of Auldrant's sun.