Rhea Scarlet (リア・スカーレット, Ria Sukaaretto?) is a minor character in Tales of Phantasia. She is the daughter of two prominent magitech scientists who moved to Hamel several years prior to the "past" of the game.

Rhea moves to Hamel from Midgards a few years before Year 4202 of the Aserian calendar, the time in which the "past" events of the game takes place. Her parents are researching magitech however, and when Dhaos gets wind of this, his subordinate Demitel razes the town. Killed with the town, Rhea asks her friend and Magic User Arche Klein to help her get her vengeance, and Arche does so by allowing Rhea to use her body. On their way to Alvanista, Cress Albane, Mint Adenade, and Claus F. Lester come across a young girl in the ruins. She introduces herself as "Rhea Scarlet", and as her situation mirrors his own hometown Toltus, Cress is unable to ignore her.

The party then travels to Venezia and ride a boat to Demitel's Mansion, where they fight through the place's numerous traps to meet Demitel in a laboratory in the basement. Demitel dismisses them, stating that he would never hurt the Scarlets to whom he viewed as his masters and that Rhea looked nothing like the true Rhea. Cress, however, notices that Demitel has a hooded skeleton reflection, much like Mars Uldole had, and figures him out as one of Dhaos's minions. They proceed to battle and defeat him, and Rhea thanks them before moving on, relinquishing Arche's body. On their quests to make pacts with Summon Spirits, the party stops by the ruined Hamel. Arche asks for a few moments, and she proceeds to create a grave for her friend, leaving a bouquet of flowers. It is during their quest to find Dhaos's motives that they discover the Scarlets's involvement with magitech. 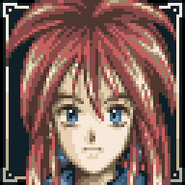 Portrait in Tales of Phantasia (SFC).