Ricardo Soldato (リカルド・ソルダート, Rikarudo Sorudaato?) is one of the protagonists in Tales of Innocence. He is a sniper who wields his bayonet with remarkable ability. Ricardo is wise, experienced, and rationally makes agreements, appearing before Ruca Milda and his companions as a mercenary for hire. He is the reincarnation of the Ratio general Hypnos.

Ricardo's fighting style is an original one consisting of long-ranged rifle shots. He has several close-ranged artes borrowed from Eugene Gallardo to deliver quick Earth-based damage. He also has Dark-elemental spells and some support spells as well. Ricardo's mystic arte is Endless Tragedy, in which he turns into Hypnos and spins his scythe around several times, releasing an energy that lifts the enemy. 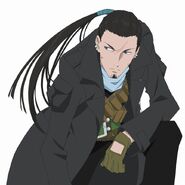