Richter Abend (リヒター・アーベント, Rihitaa Aabento?) is a character introduced in Tales of Symphonia: Dawn of the New World and serves the role as the main antagonist of the story. During the story, his partner is Aqua, the Centurion of Water. Despite being the third playable character of the game, he only joins the party very briefly at the beginning of the story and during three special sidequests involving himself and Emil Castagnier.

Even before the events of the original Tales of Symphonia, Richter lived in Tethe'alla as a researcher at the Sybak University, where he and his friend Aster were researching Ratatosk. Together, they were in charge of looking into Ratatosk's mana. However, due to a previous betrayal by Mithos's group, the spirit's trust had disappeared. Ratatosk grew angry and killed Aster in rage, and a vengeful Richter cut down Ratatosk and reduced him to his core form, which was taken away by Tenebrae before Ritcher could finish him. Since then, Richter has held resentment toward Ratatosk and founded the Vanguard to search for the Centurions' cores.

Richter first meets Emil at the beginning of the story in Luin while searching for Ratatosk's core. Richter acts as the tutorial of the story, as he teaches Emil the basics of fighting. After traveling to cave next to the former Tower of Mana with Emil, he finds Marta Lualdi and tries to kill her for the Ratatosk's core implanted on her head. This is where Emil considers Richter to be his new enemy. Richter is also a member of the Vanguard and has been said to be the founder of the Vanguard combat group, along with Brute.

Richter travels to the Ginnungagap to settle things with Ratatosk. When Emil and his companions confront him, he uses the powers of the Sacred Stone to transform the mana in his body into flames, granting him extra power. He then attacks the party but loses. As the demons try to force their way out of the door, Richter tells the party to use the Sacred Stone. Since mana is toxic to demons, it could be used to seal the door for a while. Lloyd Irving then realizes he actually wanted to turn himself into a human sacrifice to seal the Ginnungagap. Richter adds that as an added bonus, Aster would come back to life as well. Richter also bought Emil's facade of being possessed by Ratatosk again after the door was sealed, saving Marta and Lloyd when Emil attacked them. Richter does nothing but watch for the rest of the ending, and is notably surprised to hear Aster's words being said to Emil from Marta.

At the beginning of the story, Richter is shown to be a cold and cynical person, criticizing Emil for not being able to stand up for himself. When Emil goes to thank him for scaring off some bullies, Richter reveals his hatred for cowards, but also gives a mantra of inspiration to Emil. While Richter is tutoring Emil, he also admits that he is very short toward people, but that it does not mean he has something against them. He also remarks that he has no intention of changing his methods of doing things.

Richter fights with his weapons Sol and Mani. Most of his artes are elemental and share their names with the four seasons or other planetary cycles. As a half-elf, he possesses to ability to use magic. Many of the spells in his arsenal are of the Water element, possibly to represent his connection with the Centurion of Water, Aqua. Richter can use three mystic artes during a boss battle against him: Towering Inferno, Eternal Recurrence, and Lord of Flames.

Richter appears in Tales of VS. as a playable character, though to unlock him, the player must trigger extra events involving him in both Lloyd and Colette Brunel's story and Cress Albane and Kratos Aurion's story. He is one of the smartest in the tournament and very knowledgeable on matters such as battles and the world. However, beneath his intellectual demeanor is his strong desire for revenge. He joined the "Yggdrasill Battle" in pursuit of his enemy. He allies himself to no particular nation.

Richter first meets the Protagonist during a main story event, together with Emil and Caius Qualls, as an enemy who they must fight at the last area of the Sacred Mountain of Absol. Once he is defeated, they are interrupted by Celsius, who reveals what she knows of what is happening to the world, Luminasia. Upon completion of the scenario, both Richter and Celsius make their way to the Van Eltia and become members of the Ad Libitum guild, enabling both of them to be chosen as optional party members. In one skit, Marta found his spare glasses on the ground and tried them on despite Emil's protests. She ended up acting the way Richter did to Emil whenever he over-apologized, completely capturing his personality.

Cut-in image for Towering Inferno in Dawn of the New World.

Cut-in image for Lord of Flames in Dawn of the New World. 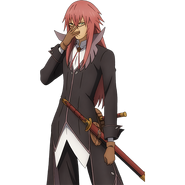