Rideaux Zek Rugievit (リドウ・ゼク・ルギエヴィート?) is a minor antagonist in Tales of Xillia 2. After the incident on Ludger Will Kresnik's first day of work at the Trigleph train station cafeteria, Rideaux puts him in a great debt of 20 million Gald.

Rideaux has long black hair with fringe, two long bangs with white tips at the sides of his face, and amber eyes. He wears a yellow shirt with a black vest over it, and his neck is tied with a purple scarf. His attire consists of red pants, a red jacket with black stripes, and red gloves. This look is completed with a black and purple fluffy scarf, as well as white and brown shoes.

Rideaux relies on close-combat when fighting but can attack at range thanks to his knives. Because of his Kresnik blood, Rideaux can also enter chromatus, in which he becomes a fearsome opponent. His mystic arte is Spike Whip. 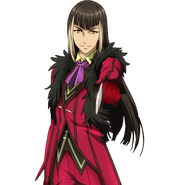 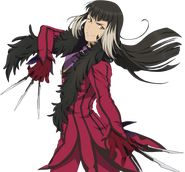