Rita Mordio (リタ・モルディオ, Rita Morudio?) is a researcher who studies blastia and hates to be interrupted during her research. She is eccentric and has a poor social disposition.

Contrary to what her young age would make one believe, Rita is actually one of the most intelligent mages of Aspio, the city of scholars. Despite this, she was treated as a weirdo due to her obsession with research and with blastia.

Rita makes a cameo appearance in Tales of Vesperia: The First Strike. She is mentioned to Niren Fedrok by his strategist Garista. Niren wants information from her on some aer that is going out of control near Shizontania, and in exchange he will give her a rare blastia core. She then explains that it was unlikely aer could go out of control, and suddenly she remembers that a barrier blastia in the ruins upstream lost its core and that there is no aer krene there either. She then answers a question Chastel Aiheap asks about what an aer krene was and comes to a conclusion that someone inserted a core in the blastia to produce more aer and then explains that, if used incorrectly, the results would be catastrophic.

Niren then asks her if it is possible to destroy the blastia but she says there was no way of knowing how unless she sees what kind of core is used to power it and asks if the aer was red. As a blastia expert she states the only way is to stop it at the source. To help them, she gives him a blastia that absorbs aer from the source and tells him all he has to do is place it near the source and activate it, and a warning that since it is also a blastia it canoverload.

After he gives her the core, she asks how he and Chastel found her and he explains that Garista told him where to look for her. She reveals that he had stolen countless blastia from her and turned them into weapons. She then uses a device to create a formula that would temporarily prevent all blastia attached with it from overloading due to the red aer. She also suggests that his unit should stop the aer flow right away or the town would be destroyed. Before Niren and Chastel leave, he asks her if she lives alone, to which she replies that the house she is living in was only a temporary laboratory and that she lives somewhere else, referencing Aspio.

When Yuri Lowell first inquired about the famed mage, Mordio, Aspio residents were in awe as to "why he wanted to see that weirdo." It is explained later in the game that the reason for her obsession was that her research was all she had due to her status as an orphan and her lack of any friends or family.

Rita's lack of social skills also stems from the fact that she always had to worry about herself instead of taking the time to socialize with others, and thus was not used to having friendly relationships. To add to the oddness, there is also something in her dresser than even Estelle is shocked about. Although there are many theories about what was in Rita's dresser, it is never found out for sure. In the end credits, it shows that Rita has continued to be a researcher, conducting experiments with chemicals and flying around in a device of her own build. She flies by Estelle and is later seen having tea with her, indicating that she maintains her friendship with the princess. At the end, the entire gang is seen at a reunion.

Rita has short brown hair and green eyes. Her outfit consists of a minidress with red, black and white stripes, black baggy sleeves and red fingerless gloves. Her left leg is covered by a single red stocking with yellow stripes whilst her right leg is covered by a single white stocking. She wears a black boot on her right leg and a red boot on her left leg and wears her bodhi blastia as a choker around her neck. She also wears a pair of goggles on her forehead.

Rita is passionate when it comes to blastia, up to the point of calling them by gender. When a blastia is abused or destroyed, she takes it personally. Rita is also overprotective of Estelle, making sure she does not do anything risky.

Rita's primary weaponry is made up of scrolls and whips, with books taking a secondary place. Her best weapon for physical attack is the "Ivy Blade", whereas the "Aspion" is preferred for magical attack. As Rita is a token mage character, her main offense is provided through a large arsenal of spells, most of them gaining more range or projectiles for every time they are used, accompanied by a small selection of melee artes. She is able to use spells that primarily focus on four of the six elements: Fire, Water, Earth, and Darkness. Her mystic artes include Ancient Catastrophe as well as Indignation in the PlayStation 3 port of Tales of Vesperia. Of particular note is Rita's powers when paired with any level of Over Limit in Tales of Vesperia, as Over Limit allows the immediate casting of any spell. The ability can be paired with powerful area spells such as Tidal Wave or Meteor Storm as well as powerful single target spells such as Violent Pain to wreak havoc on the enemy. 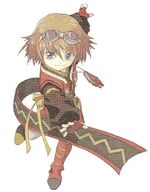 Rita appears in Tales of VS. as a magician from the Free City Union of Dyne, looking for a lot of mana. She is paired up with Judith from her original game. She plays no real significance during the story that much, but she does appear in most of the story modes as a opponent. During the events of Jade's story mode, Dhaos from Tales of Phantasia creates a replica of her and Judith to fight Jade Curtiss and Anise Tatlin.

In Tales of the World: Radiant Mythology 3, Rita is introduced together with Yuri and Estelle after the story mission against Saleh. During most of the events in the game, she and Harold Berselius try to understand the documents that have been acquired by the Ad Libitum, in order to find a way to revert Lazaris's reformation of Luminatia before it is complete. In the final two story missions, after collecting all of the necessary documents, Rita, the Protagonist, and Kanonno Grassvalley return to the Holy Land of Randgriz to find the second vortex that connects the World Tree. As they attempt to revert the situation, the process fails and their efforts are wasted as the reformation is now closer to its final stage.

In Tales of Crestoria, Rita is an engineer who lives in Nokana. When her door is kicked down by Vicious, she immediately retaliates by setting him on fire. The group with Vicious explains that they needed someone to repair the mana energy convertor on their ship that was damaged in an attack. Rita initially refuses until she notices a crystal in Yuna Azetta's possession, a crystal that came out of a monster that Velvet Crowe calls an incarnation. Kanata Hjuger mentions that the monster that attacked them left behind several around the energy convertor. It turns out that Rita has currently been researching incarnations. She accepts the job in return for all of the "incarnation crystals" as well as Velvet's information on incarnations. 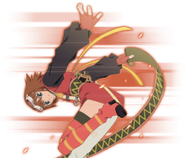