View source
watch 01:00
Tales of Berseria - Character Trailer Rokurou
Do you like this video?
Play Sound

Rokurou Rangetsu (ロクロウ・ランゲツ?) is a protagonist in Tales of Berseria. Despite having become a daemon, he continues to walk his own path.

Rokurou is a part of the Rangetsu family from outside of the continent, signified by his unusual appearance and attire, alongside Ichiro Rangetsu, his firstborn brother. He is the sixth child, thus the name "Rokurou". Eventually, Ichiro killed their mother, and became the next Shigure of the Rangetsu clan. Due to how the heir inherits Stormhowl while the siblings get imitations, Rokurou owned a counterfeit Stormhowl, until Shigure broke it using the genuine sword. Out of envy of Shigure, Rokurou spread a rumors about his brother for an excuse to kill him, one of which was that Shigure meant to abandon their master, Lancelot du Capalus. As a response for this treachery, Lancelot ordered Rokurou to kill Shigure, for a Ragnetsu swordsman can only be defeated by another Rangetsu swordsman. On the day the two fought, Rokurou came at Shigure with a large sword. Shigure single-handedly defeated his brother with only a knife. Shigure told Rokurou to get stronger before leaving. Humiliated and filled with hatred toward his own weakness, Rokurou became a daemon, but managed to retain himself.

As punishment for failure, Lancelot had Rokurou thrown in Titania. He later joins Velvet Crowe on her journey as a way of paying off his debt for telling him where to find his false Stormhowl. Referring to it as "His life." And that his family always pays what is owed. A "witch" named Magilou tags along as they steal an exorcist ship and sail away from the island.

Taking his changed appearance in stride, Rokurou moves ever forward, advancing his family's sword style. Rokurou is on the hunt to kill Shigure, this time, toprove stronger. Later on in the story it is revealed that he spread rumors about Shigure, that Shigure plotted to assassinate the clan leader, plus he wanted everything his brother had which was status money and his family, in order to have a just cause for killing him. With his newly forged sword Stormquell he successfully kills his brother. At the end of the story he chooses not to be purified, and with Stormhowl, he continues to search for worthy opponents to battle.

Rokurou takes the appearance of a samurai, with traditional clothing and armor. Despite his human-like appearance, his true nature as a daemon appears on the right side of his face, which is dyed black with red markings surrounding a red eye. Rokurou himself is kind and cheerful, taking care of the people around him. In this, he is a good match for the headstrong and reckless Velvet Crowe, as well as the initially blank and will-less Laphicet. He is jovial, supportive, and protective of the other members of the party, serving as a parental figure to Laphicet and Kamoana and a drinking buddy to Eizen, while passionately fighting alongside Velvet and keeping Eleanor Hume from being sucked into the Earthpulse. He frequently teases Magilou much like a brother would. Rokurou has a knack for enjoying a good challenge, especially when it is one on one, and he will retaliate if anyone else interferes. Knowing of his own violent nature, he will do his best to make sure his friends don't get caught in his battle-frenzied state.

Rokurou fights using two blades, neither of which is the sword across his back. His martial artes consist of slashing twin blades, while his hidden artes are seal-based elemental attacks that follow a numerical system. His Break Soul is Vengeful Stance, which has him enter a counterattack stance that goes off if struck, similar to Chloe Valens from Tales of Legendia. His mystic artes are Form 0: Sunder, Rangetsu Heron, and Form 9: Final Judgment. He also shares a dual mystic arte with Eizen known as Last Laugh.

It is due to his arte setup in gameplay that Rokurou can be a very difficult character to use when faced off against any enemies resistant to non-elemental damage, as well as with large groups of enemies, giving him trouble due to his lack of decent area-of-effects. His hidden artes are also fairly difficult to use, as some of them require proper placement, as well as having a non-standard Break Soul to make use of in the form of a counter or reversal. However, if fully mastered, Rokurou can easily extend combos in various ways on any single target, via either intuitive use of his artes or timing his Break Soul during an incoming armored-counterattack during his assault in order to keep up his own offense.

In Tales of Zestiria the X, Rokurou wanders into the storage room in Titania and finds Velvet and Seres, with Velvet holding his Stormhowl. After she gives it back, the three discuss their plan to escape. After Seres releases the daemons, Rokurou splits up to join the riot while the women take the other direction. When a dragon appears and attacks the docks, Rokurou shows up and fights it alongside Magilou. After Velvet devours the dragon, she, Rokurou, and Magilou are last seen on a ship. 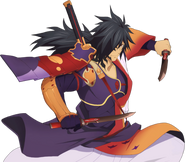 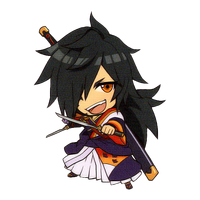