Rose (ロゼ, Roze?) is a playable character in Tales of Zestiria. She is the leader of the merchant guild, the Sparrowfeathers, as well as the assassins' guild, the Scattered Bones. Her true name, given to her by Sorey, is Wilkis Wilk (ウィクエク＝ウィク, Wikueku Wiku?), which means "Rose is Rose".

As a child, Rose was found wandering a battlefield in the north when she was taken in by Brad, leader of the Windriders mercenary guild. Over the years, Rose grew up with the Windriders as family. During her time, the Windriders became legendary throughout the land as Rolance's most trusted mercenaries. Over this success, Rose eventually became engaged with prince Konan. However, things quickly turned for the worse when Konan suddenly accused Brad for conspiring in the murder of the first imperial prince. In retaliation for his betrayal, Rose killed Konan. In revelation of this evil, the Windriders became the Scattered Bones after their name was tarnished.

Rose has shoulder-length, dark red hair and blue eyes. She wears a red-and-pink, thigh-length tunic with a V-shaped neckline, has brown belts around her waist, and wears a white and black jacket with gold pins over a pale pink bolero. The rest of her attire consists of white pants; brown, heeled boots with gold ornaments; and two pink ribbons wrapped around her legs near her boots. Rose also wears a yellow scarf, and a green cord hangs down from her knives' sheaths.

As the boss of both the Sparrowfeathers and Scattered Bones, Rose has a natural talent for leadership. She has a strong sense of justice and evaluates what kind of person each of her potential victims is before she decides whether to kill them. She does not let her personal feelings get in the way of what must be done. Rose does not like dwelling on negative emotions and may at times appear flippant because of this. She is also very honest, sometimes bluntly so, telling Sorey that his hesitation toward killing hellions that cannot be purified is holding the group back. Rose makes several of her decisions based on instinct, such as when she saves Sorey's life in Glaivend Basin and later tells him that she does not know why she rescued him. She also has a finely-tuned sense of when something is wrong, and her "bad feelings" are usually correct.

Although Rose may sometimes act ruthlessly, she is much more likely to give second chances when children are concerned, preferring to admonish them herself before turning them over to the authorities. This is evidenced when, in Ladylake, she objects if Sorey suggests turning the band of pickpockets in to the guards instead of speaking to them himself; and in Volgran Forest, when she tosses a bag of money to the gang of bandits along with her warning to stop hunting soldiers. This softheartedness may be a result of empathy due to her own upbringing.

Rose fights using two daggers, having two separate weapon slots to emphasize her dual-wielding abilities. Similarly to Sorey, due to her naturally high resonance, she can perform armatization with the seraphim. Her mystic artes are Jade Luminescence and Crown of Torment. She also shares a mystic arte with Sorey known as Ultima Elementia. 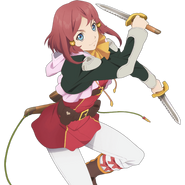 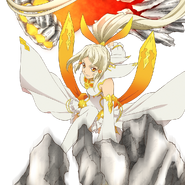 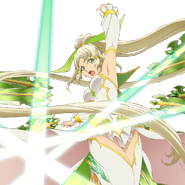 Reference sheet for Fire Armatus, as shown on the Tales of the Rays Twitter.

A young Rose with Brad in Tales of Zestiria the X.