Rowen J. Ilbert (ローエンＪ．イルベルト, Rooen J. Iruberuto?) is a playable character in Tales of Xillia. He is a butler in the noble class Sharil family under Lord Cline Sharil. In the past, he was a famous Rashugalan strategist known as the "Conductor". He meets Milla Maxwell and Jude Mathis during their first visit to Sharilton, and he later joins them in their quest.

Rowen initially served with Nachtigal. Carrie I. Fenn was his beloved. Unfortunately during the Battle of Fezebel, she was lost and transported to Elympios due to a hole in the schism 20 years ago. Eventually, Rowen left to serve the Sharil family.

Jude and Milla initially encounter Rowen while they are browsing a market stall in Sharilton. He is there escorting Driselle Sharil, the daughter of the family he serves. After the party gets trapped by city guards in pursuit of Jude and Milla, Rowen helps them escape the city and joins the party thereafter. Rowen eventually comes across Carrie on Elympios, already married and with a daughter.

During the events of Tales of Xillia 2, Rowen serves as Gaius's prime minister in an attempt to form a working relationship between Rieze Maxia and Elympios.

Rowen is a butler, and as such, he is dressed in formal attire including a tailcoat jacket. He has long, white hair that he keeps tied back in a neat ponytail. Rowen is always very calm even in tense situations, where he will often make jokes to ease the atmosphere. Even though he appears to have an ever-gentle expression, he can deliver a piercing gaze with his eyes, indicating that he can be very serious when the time calls for it. At 62 years of age, he is the oldest playable Tales character so far, based on appearance. He often has amusing conversations with Alvin, poking fun at Jude not knowing about "adult" things, and he sometimes even jokes about his own age.

Rowen primarily uses a saber as his weapon. However, he is capable of attacking from a distance with concealed knives. Rowen's primary stat in his Lilium Orb is Intelligence, as he is a specialist in offensive spirit magic. Rowen is a master of magic and has many long distance spells at his disposal, covering all elemental types except Dark. His characteristic skill, "Arte Tuning" (術後調律, Jutsugochouritsu?, "Magic Aftertuning"), grants him further mastery over his artes.

When Rowen casts a spell, various button inputs will appear, enabling the activation of his tuning ability. This has a wide range of effects on Rowen's artes. Some inputs will add extra hits to a spell, while others will allow him to control the movement of the spell. Rowen is the only Spirit Magic user who can do this, making his spells a formidable contribution to the party. Rowen's partner characteristic support skill is "Auto Magic Guard" (オートマジックガード, Ootomajikkugaado?). While linked with Rowen, if he is the secondary partner he will automatically use Magic Guard against enemy spells, which protects both him and the primary partner. A unique feature to Rowen's Magic Guard is that both he and the primary partner can still move around while the barrier is up, unlike the standard Magic Guard. Rowen is best utilized against Magic-type monsters whose specialty is spell artes.

In Tales of Crestoria, Rowen is the military tactician of Blanquille who serves under Prince Richard. Following an uprising plotted by Richard's uncle, Rowen and Richard are forced to flee, with Rowen posing as Richard's steward.

Cut-in image for Grand Finale in Tales of Xillia 2. 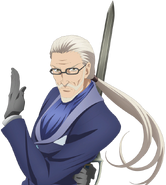 Cut-in image for Apocalyptic Sforzando in Tales of Xillia 2.