Aselia Wiki
Register
Don't have an account?
Sign In
Advertisement
in: Rubia Natwick, Tales of the Tempest characters, Protagonists
English

Rubia Natwick (ルビア・ナトウィック, Rubia Natowikku?) is the heroine of Tales of the Tempest and young friend of Caius Qualls who grew up with him in the village of Feln. As the daughter of two Church members, her father being the head priest Gord Natwick (ゴルド・ナトウィック, Gorudo Natowikku?), she is going to study at the capital city of Janna when she gets older, but her plans are put on hold when Rommy kills her parents.

Rubia is a young woman with bright red hair and emerald-green eyes. She wears two flowers in her hair, which is braided and fashioned into a ponytail in the back. Her attire consists of a large, flower-inspired dress that bears the resemblance of a pink tulip, while the green "stem" of flower covers her midsection. She wears a heavily padded material on her arms and dons a cap that splits into two and ends in two blue orbs. Her weapon of choice is a colorful, nature-oriented staff.

Rubia is a cheerful girl and tries her best to sound happy around other people, especially Caius. Due to both Caius and Rubia knowing each other for so long, she understands and deeply cares for him. Rubia ends up emotionally wounded after her parents' death. She begins doubting others, even Caius, but after composing herself, she tries her best to help him and the others. After seeing Caius transform into a Leymon, Rubia begins to fear him. When she is captured by Lukius Bridges and Rommy to use her to obtain the Pensient from Caius, they take advantage of this in order to persuade her into believing Caius is dangerous. However, Caius manages to show her that even though he is a half-Leymon, his personality has not changed.

Rubia, along with Caius, first appears as an available member in Tales of the World: Radiant Mythology 2 on the Van Eltia. Both of them mainly serve no purpose in the main story and hardly do anything else.

Rubia appears as a playable character in Tales of the Heroes: Twin Brave after completing Caius's serious scenario, and she is the controllable character for the comical scenario. In Rubia's comical scenario, she is constantly getting angry on Caius. When other Tales characters notice the commotion and try to calm Rubia down, she ends up taking her anger out on the characters.

Rubia appears in Tales of Crestoria's limited quest: "Intertwining Journeys". Rubia is training in her father's footsteps to become a sanctess, and is looking for her teacher, Ange Serena. As she walks into the village where she's supposed to meet Ange, she spots a knight trying to look at a girl's face. Apparently, there are rumors about transgressors nearby. Rubia tells the knight to back off, which leads the two to argue. Luckily, Ange comes in and tells the knight that the girls were with her and takes them both to an inn. The girl who was with them introduces herself as Misella. Misella says that she doesn't have any intent on becoming a sanctess, only following Ange's lead, but she will not mind helping out.

After killing a cluster of monsters due to the growing population being a threat, the girls camp for the night. During dinner, Misella says that she came here with a boy named Kanata. They were with a group, but got separated yesterday, right before they arrived in town. Before going to sleep, Misella asks Rubia whether or not she would broadcast the vision of someone accidentally killing an innocent person in order to save someone else. Rubia says she would, because all crimes needed to be answered for, no matter what the reason.

The next morning, the girls wander town to help out, such as giving medicine to a sick widow, and feeding the orphans under Ange's care, and helping a boy find a lost friend in a cave. Suddenly, the soldier from yesterday returns with backup, telling Rubia that Misella is a transgressor!

Misella breaks through the guards and runs out. Rubia tries to follow her, only for Misella to tell her to stay out of her way. When Ange arrives, the guards accuse her of housing a trasgressor. The villagers respond by yelling at the guards to leave Ange alone.

During their time alone at an inn, Ange admits to Rubia that she knew Misella was a transgressor, but wanted Misella herself to admit it first. Ange believes Misella only attacked Rubia to keep her safe. Rubia tells Ange what Misella told her last night, and realizes that Misella was referring to what happened to her. Ange says she would have encouraged Misella to find her atonement, but she believes that Misella has reconciled with her crime. Ange decides to go help Misella escape so she could find her atonement, because the vision orb system is far from perfect.

Spurred on by Ange's words, Rubia helps out by creating a smoke screen for Misella to escape the guards through. Ange and Rubia take Misella to the cave where they rescued a young boy. The boy said he found another way out through the cave. 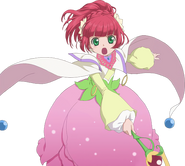 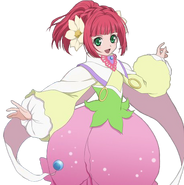