Ruca Milda (ルカ・ミルダ, Ruka Miruda?) is the main protagonist of Tales of Innocence. He is the reincarnation of the Sensus general Asura.

Ruca is the son of a merchant and lives in Regnum's capital city that shares its name. He is a shy honors student who is constantly picked on by his classmates. On his way back from a shop, he meets a hungry Illia Animi, and her friend Coda, and later, the three encounter a couple of Reborn hunters who attempt to capture the two. Suddenly, Ruca musters enough courage to awaken Asura's power and fight the hunters off. Soon after, they are confronted by Mathias who reveals that Ruca is Asura, and Illia is his lover, Inanna, before leaving. Illia explains to the confused Ruca about the situation. Eventually, the three decide to find the Manifest before Mathias can get her hands on it. Before long, however, they are ambushed and captured by Arca agents working for Mathias. They are taken to a holding cell, where other Reborns are taken, where they meet Thitose Cxarma and Spada Belforma, who is the reincarnated Durandal.

Eventually, unlike Thitose, who is joining Arca, the others are forced into a battle against Garam soldiers. During the fight, they come across Ricardo Soldato, who has just ambushed their campsite. When a man named Hasta Ekstermi appears, Ricardo holds him off, allowing the party to escape.

Being the son of a rich merchant, Ruca dresses in a rather formal manner. He wears a yellow muffler stuffed into his blue suit, with dark blue trousers and a pair of brown boots. When he obtains a broadsword, he has brown suspenders around his chest to hold the sheath on his back. As he is an honor student, he is intelligent and able to observe and understand situations quickly. However, because of his shyness, he is constantly bullied by his classmates. Ruca feels helpless without Asura's power, with which he feels confident enough to fight.

As the reincarnation of Asura, Ruca fights wielding a broadsword. His fighting stance has the sword on his right side with the blade behind him. After first awakening to Asura's power, Ruca is able to handle two Arca agents, despite never having been in a fight before.

Ruca appears as playable character in Tales of the World: Radiant Mythology 2, alongside Illia and Spada Belforma. Ruca and Illia are seen at the very beginning of the game since they are residents on the Van Eltia. Ruca accompanies the Protagonist and Annie Barrs during the ninth story mission when they travel into the snow passage to find Veigue Lungberg and the others.

When they arrive at the inner levels of the dungeon, they find Veigue fighting with the Craymel Celsius to save Claire Bennett. After fighting Celsius and saving Claire, he returns to the ship with the others. Ruca and Illia then go on another mission to the canyon with the player, where they find a flower that is used in one of Raine Sage's experiments. Ruca's job class in the game is a Magic Knight, and the weapon he uses throughout the entire game is the average "Broad Sword".

Ruca appears in Tales of the Heroes: Twin Brave as a playable character in the comical scenario, in which he continues to run errands for other Tales characters. In the serious scenario, he and Spada travel to the World Tree to investigate the disease that attacked his town.

Taking place after the ending of Tales of Innocence R, Ruca is one of the many nexuses summoned to Tir Na Nog during Phantom's mass exoflection of worlds. Separated from his friends, he wanders until he meets Veigue Lungberg and Claire Bennett, but soon ends up captured by the Salvation Front due to his status as an omega nexus. He is later seen imprisoned within Phantom's mirrage array, along with Illia.

After the Mirrorshift, Ruca and Illia were captured again by the Asgard Empire, which has taken an interest in their unique anima type caused by their nature as Reborn. Before they can experiment on him, Ruca escapes with Rubia Natwick's help and discovers that he regained his lost Reborn powers. Eventually, he meets up with Kongwai Tao and the rest of the party, and together they rescue Illia. The two Reborn then agree to join the party as they work to rescue Rubia and her friends, discover what makes Reborn important to Asgard, and identify the unknown third Reborn still in the Empire's custody.

Ruca is frequently seen assisting Jude Mathis in his clinic, having become an apprentice to learn everything he can about becoming a doctor.

Ruca appears in Tales of Crestoria during the Limited Quest "Panic! Library Ruckus". Growing up poor, Ruca's friend Illia Animi didn't have proper education, so she made up her mind to build a school for poor people. Ruca decides to help her out. While Illia is travelling worldwide to raise money, Ruca is tasked to find suitable sites for the school. After a storm blew down the bridge to the library he is heading toward, Ruca laments as he has to take a detour through a forest where the Great Transgressor is rumored to be last spotted. Crossing his fingers that he can make it through in one piece, Ruca is determined to help Illia accomplish her dream. In the forest he runs into a Polwigle that quickly gets shot by Vicious the Great Transgressor.

Cut-in image for Maou Shakumetsujin in Tales of Innocence R. 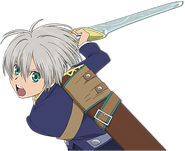