Seles Wilder (セレス・ワイルダー, Seresu Wairudaa?) is a character in Tales of Symphonia. She is the half-sister of Zelos Wilder and is originally confined to the Southeast Abbey for life, but returns home after the events of Tales of Symphonia. She has been easily susceptible to illness for most of her life, and because of her poor constitution, she relies on an Exsphere through the events of the first game to allow her to function normally on a day to day basis.

Seles was born to a half-elf mistress of Zelos's father, the previous Chosen of Tethe'alla. After a few years, Zelos's father committed suicide and the title of Chosen had to be given to Zelos. Despite the fact that they were born to different mothers, Zelos and Seles still loved and played with one other, not caring that they were not fully related, as claimed by citizens of Meltokio. Seles's mother tried to kill Zelos to make Seles the next Chosen; however, the spell she shot at Zelos instead hit Zelos's mother, Mylene Wilder, killing her. As a result she was executed, and Seles was sentenced to house arrest in the South East Abbey for life, although the official reason given was that it was for her health. Zelos suffers from guilt up until late events of the game, blaming himself for the fact that Seles lost her mother and is not allowed to see the world outside her prison.

According to the Tales of Symphonia manga, Zelos gave his Cruxis Crystal to Seles as a symbol of their relationship after their mothers' deaths, as he was then the only family Seles has left. Seles often acts angry toward Zelos because of his infrequent visits, which were partly due to guilt and partly due to his involvement with Lloyd and Cruxis. Their rough relationship stemmed from Zelos's belief that Seles wanted nothing more than to be the Chosen and that it was his existence that had made her unhappy. However the statement makes Seles really angry and immediately slaps Zelos because he was willing to die in order to transfer the title of Chosen to Seles. Seles then reveals that she really only wanted to live as a family with Zelos and for things between them to return to the way they were when they were children. Seles later admits to Zelos that when they were young, the only times she was truly happy was when he had played with her.

Seles reappears at the Meltokio coliseum as a boss fight. After defeating the tournament three times, Seles arrives with Tokunaga and challenges the winner of the match to a one-on-one duel. If she wins, she says she has proved herself to Zelos. Alternatively, if the player wins, she hands over Zelos's ultimate sword, the "Last Fencer". Afterward, if Zelos is the one to defeat her, she asks if she can join the party. This particular outcome happens only if the player has chosen to keep Zelos as the eight party member.

Seles appears to have a bit of a brother complex and has for quite some time been a tad possessive of her brother, despite the fact she pretended to hate him at one point. There is a skit that reveals that she dislikes Sheena Fujibayashi because Zelos once told Seles that he was fond of her. Seles has attacked Sheena at some point, calling her a "witch" for "seducing" her brother. 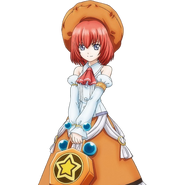