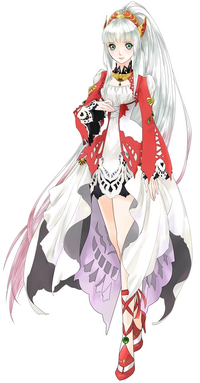 This article is about the race in Tales of Zestiria. For the leaders of Cruxis in Tales of Symphonia, see Four Seraphim.

The seraphim (天族, Tenzoku?, "Heavenly Tribe") are a spiritual race in the world of Tales of Zestiria. Very similar to Spirits in previous entries in the Tales series, they are linked to the elements. With the help of their Prime Lord, a Shepherd can make a pact with the seraphim, an act required for them to complete their task of purifying hellions and the malevolence, ultimately defeating the Lord of Calamity. Normin are a special type of seraphim, and the Five Lords are the most powerful seraphim. In the past, depicted in Tales of Berseria, they were known as malakhim.

Seraphim are invisible to all humans except those with high resonance. Because of this, several people consider them either extinct or legendary. Most seraphim are humanoid in appearance, but some may resemble cats or dogs. They are long-lived when compared to humans; some can number their years in the thousands. In addition to their commonly known names, seraphim also have true names. These true names are required in order to form a contract with the seraphim and for Shepherds to initiate armatization. A seraph generally has magical powers related to one of the four elements: Fire, Water, Wind, and Earth.

According to the former Shepherd Pawan, it is possible for a human to become a seraph depending on how they die, though Lailah mentions that the exact method varies between individuals. Edna explains that when humans become seraphim, they will lose the memories of when they were a human being. However, the traits, emotions and personalities from the previous life will be carried over as a seraph. Seraphim cannot give birth to malevolence, but they can be infected by it through external interferences. They require a pure vessel to avoid succumbing to the malevolence, and they cannot stray too far from that vessel.

If seraphim completely surrender themselves to malevolence, they will transform into dragons. Fully-materialized dragons can be seen by normal humans and cannot be purified. Seraphim also emanate a "blessed domain", which ordinarily protects a certain area; however, for unknown reasons, some seraphim's domains, such as Dezel's, may instead summon hellions. Some seraphim make an oath to themselves to restrict some of their abilities in exchange for further increased power. For example, Lailah cannot talk about the past Shepherd or Maotelus, but in return, her purification abilities are augmented.

The main seraph characters are designed by Mutsumi Inomata, Daigo Okumura, and Minoru Iwamoto, all previous designers for the series. Their physical designs were created in opposition to the elements they represented. For example, the slim and petite Lailah wields the power of Fire, a powerful and aggressive element. The seraphim were conceived at an early stage as a race of beings invisible to normal humans. This presented problems for the developers in accepting quests from human non-playable characters. Effort was put into linking the seraphim's gameplay functions and story. Go Shiina, the composer for Tales of Legendia and Tales of Zestiria, with Motoi Sakuraba, handled tracks related to the seraphim. They included a high amount of choral work.