Shadow (シャドウ, Shadou?) is the Spirit of Darkness. Shadow has appeared in several games of the series as a character or cameo and can be summoned through the Shadow arte. In most games, Shadow is opposed by Rem, the Spirit of Light. In the Aselia timeline games, Shadow is opposed by Luna and Aska, the Spirits of Light. In Tales of Rebirth, Shadow is replaced by Eephon, the Sacred Beast of Darkness. Shadow's appearance has varied in many games. In Tales of Phantasia, he appeared simply as a shadow made from darkness, but later games gave him the appearance of a humanoid made of darkness and a warrior.

Shadow makes his first appearance in Tales of Phantasia as an optional Spirit. He appears as a ghost-like spirit. Found in the Cave of Darkness, he is the Dark Spirit, only agreeing to help the party because dark creatures, his friends, have been brainwashed into helping Dhaos. Shadow requires the Amethyst Ring to forge a pact, granting Claus F. Lester with the power to summon him in battle though the Shadow arte.

Shadow appears in Tales of Phantasia: Narikiri Dungeon as the Spirit of Dark and one of the twelve Spirits that must be fought during the Ordeal of Spirits. He appears on the last level of the Cave of Darkness in AC. 4354 and is the boss of the dungeon. Once defeated, he teaches Mel and Dio about balance.[1]

Shadow appears in Tales of Phantasia: Narikiri Dungeon X as a Spirit. In the story, Mel and Dio must collect his essence to save Vahalla City. Shadow is found on the bottom floor of the Cave of Darkness in AC. 4354 and is the boss of the dungeon. Upon defeat, Mel and Dio collect his essence. After completing the first quest of the story and obtaining the "Amethyst" jewel in Lone Valley, the group may challenge Shadow again in order to allow Claus to summon him in battle.

Shadow appears in Tales of the World: Summoner's Lineage as unit Fulein K. Lester can summon.

Shadow appears in Tales of Eternia as one of the Greater Craymels, and he is the Governing Craymel of Celestia, with dominion over Gnome, Volt, and Celsius. The Dark Craymel governs the use of all Dark-elemental spells. Shadow first appears when the party finished acquiring the Primary Craymels under his control, congratulating them and granting the party the Excalibur sword. A proud being, he is found in the Shadow Cave, and tests the party's will. Finding them acceptable, he joins them. Shadow can be summoned through the arte Shadow.

In battle, Shadow is aided by two "Empty Dolls" who regenerate a large amount of health at a rapid rate and act as essentially immortal guards. He wields his double-bladed sword by swinging it in large arcs, thrusting it, or spinning it in front of him. His battle style is derived from countering against melee characters' dashing and air attacks, which give him enough room to bombard with high-level Dark-elemental Craymel Artes. 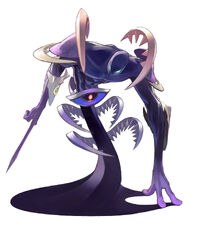 Shadow, the Envoy from the Dark Abyss, appears in Tales of Symphonia as one Tethe'allan Summon Spirits. Shadow appears as a vaguely humanoid shape made of a dark substance that must be found and rejoined. Shadow does not use full sentences and speaks in broken sentences. He is found south of the Fooji Mountains in the Temple of Darkness. He can be summoned through the arte Summon: Darkness. In battle, Shadow attacks mainly through the agency of his limbs, which he can transform into various weapons such as axes or swords. He also has access to Dark Shower, a variation of Sword Rain, in which he turns his limbs into piercing lances and thrusts forward, followed by slamming his hand downward. Shadow can cast the few Dark-elemental spells that exist in the game, Dark Sphere and Bloody Lance.

In further reference to his position as the Summon Spirit of Darkness, Shadow's name is attached to monster grimoires which teach Darkness-elemental artes: "Shadow's Language", which teaches Scare Shot, and "Shadow's Walk", which teaches Negative Gate.[2] He is also briefly mentioned in a skit between Sheena and Emil. 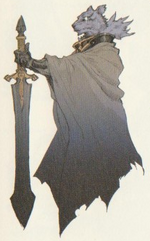 Shadow appears in Tales of Legendia as one of the Summon Spirits. He appears as a feline creature and carries a large broadsword. Shadow makes his first appearance at the end of Norma Beatty's character quest as a glowing ball of light only Grune can see. Acknowledging the role the immaturity of the world has on both Grune and her power, Shadow turns into seed form and rests in her urn. During the events of the interlude chapter, Grune plants his seed in the Village of the Ferines. At the end of the story, Shadow is born from this seed as one of the Summon Spirits bequeathed onto the world. Given his nature in other games, he associated with the game's Curse element, which consists of spells associated with the Darkness element in other games.

Shadow is mentioned in Tales of the Abyss as the aggregate sentience of the First Fonon, the Fonon of Darkness. His name is used to represent the sixth and seventh months, Shadow Decan and Shadow Redecan.

Shadow is the Great Spirit of Darkness who joins Verius in testing Ludger Will Kresnik and his group in determining their strength to overcome Origin's Trial. Shadow possesses Vera while Verius possesses Nova, and the two stealthily direct Ludger's group to the Illusionary Darkness, where they must overcome trials and monsters drawn from the fear in their hearts. At the end, the two are satisfied with what they have seen, though Shadow is surprised to see someone overcoming this test. The pair then disappear, entrusting Origin's Trial to Ludger and Origin and Chronos to Milla Maxwell.