"Rembrandt" redirects here. For the character from the same game, see Ilene Rembrandt.

Shane Rembrandt (シャイン・レンブラント, Shain Renburanto?, "Shine Rembrandt") is a supporting character and later a minor antagonist in Tales of Destiny. He is a scientist and Oberon Corporation executive who lives in the Seinegaldian capital of Darilsheid. His daughter is Ilene Rembrandt, another Oberon executive.

The group first meets Rembrandt in Hugo Gilchrist's mansion, where he personally greets Leon Magnus, who inquires about Hugo. Rembrandt refers to Leon as "young master", which frustrates him, prompting Rutee Katrea to comment on his "spoiled" behavior. The group then meets with Hugo before leaving Darilsheid to investigate the Eye of Atamoni's disappearance at the nearby Straylize Temple, and Rembrandt remains unseen for a majority of the game's plot.

Rembrandt later reappears as one of Hugo's mysterious hooded subordinates after Lydon Bernhardt's defeat and the retrieval of the Eye of Atamoni. His identity is not unveiled until later, however, after Hugo uses the Eye of Atamoni to resurrect the Aethersphere and its aeropolis cities. With Hugo's three Oberon executives joining him as accomplices, he appoints them to three of the revived aerial cities. Rembrandt is appointed the guardian of the Mikheil military base. When the group infiltrates the abandoned city to board the Cruiser than can transport them to the aeropolis capital of Dycroft, they find a hooded Rembrandt, who emerges from the Cruiser to politely welcome the group. 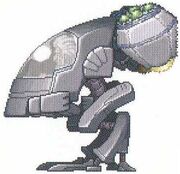 Stahn Aileron and the others are surprised when Rembrandt unveils himself and claims that the Cruiser has "precious cargo" that must be protected, referring to the hostaged Marian Fustel. Unable to reason with Rembrandt, the group is forced into battle with him. Upon his defeat, Garr Kelvin has Chelsea Torn check on Marian. Rembrandt then reveals that Ilene, who the group fought in the Helraios research facility, was his daughter and apologizes to her before dying himself. Marian is revealed to be safe, and the group then uses the Cruiser to penetrate Dycroft's protective barrier and infiltrate Belcrant, where Hugo awaits them.

Rembrandt is an older man with a humble demeanor and keen sense of perception. He has unkempt white hair and wears a lab coat, denoting his position as one of Oberon's top scientists. Rembrandt is loyal to Hugo and his goals, having accompanied him since his poor archaeological days, prior to his discovery of the Swordian Berselius, which led to his mental decline. Rembrandt is regarded as a highly talented scientist, capable of engineering Aetherian technology, and he fights in battle using a weaponized pod.