Sorey (スレイ, Surei?) is the main protagonist in Tales of Zestiria. He has a kind heart, an honest expression, and a positive outlook on life. He lives in Elysia, the village of seraphim, and is the only human among them. Unlike most humans, Sorey can see seraphim and is childhood friends with a Water seraph, Mikleo. As a child, he came into the possession of a book called the Celestial Record, and from that point, he has had a fascination with ancient ruins. Sorey later enters into a contract with Lailah to become a Shepherd.

Sorey's mother was killed during the Dawn of Chaos, and Sorey was taken in by Gramps to Elysia. There he was raised with his Seraphim friend Mikleo for 17 years before the start of the events of the game. He and Mikleo grew up with a love for archeology, studying old ruins and legends, especially those contained in the Celestial Records. It is during one of his explorations into nearby ruins that they encounter a knight named Alisha unconscious in the middle of the temple. Together with Mikleo he brings her back to his village and helps her get back on her feet so she can travel home. However, after she leaves, a mysterious fox-like assassin shows up looking for her, having killed one of the seraphim named Mason. Worried for her safety, Sorey and Mikleo leave the village in the dead of night to catch up to her and warn her of the threat on her life. The two journey off to the city of Ladylake where their fates would change forever.

During their time in the city, the growing threat of the malevolence coming from agitated civilians on edge grows out of control all the while during a festival to honor the legacy of those who were once called the Shepherds, leading guides of humanity, warriors destined to beat back the darkness and bring light back to the world. During this festival, he fights off the threat of the hellion and pulls the legendary sword from the alter, declaring to the world that the Shepard has returned.

Along the way, Sorey meets many different seraphim who aid him in his quest to bring back a peaceful world, including Lailah, a Fire seraph with the power of the flames of purification, Edna, a "unique" Earth seraph, and the Wind seraphim Zaveid and Dezel. Together they journey with Alisha, and eventually the mysterious merchant trader Rose, to restore order to the world and beat back the malevolence wrought by the new Lord of Calamity. He is test physically, mentally, and spiritually during his quest as he learns more about the world, the new Lord of Calamity, Heldalf, and even about his past and how it ties into the events that are taking place.

Sorey ultimately kills the Lord of Calamity without falling to malevolence after truly understanding his duty. He then falls into a deep sleep to nurture the land's resonance and heal it from the malevolence. It is implied that Sorey eventually returns to the world after much time has passed, rescuing Mikleo from a collapsing ruin.

Sorey has brown hair, which is slightly shifted to the right. He has green eyes and wears yellow feather earrings. His attire consists of a blue shirt with white gloves, black pants with white boots, and a large white cape that extends over his chest. The cape, fashioned after the style of past Shepherds, was given to him by Alisha Diphda as thanks for helping her.

Sorey's kindhearted personality shapes him into a person who cannot leave someone who is troubled alone. This trait becomes his flaw because, as a Shepherd, he cannot take sides in the conflict between nations in order to avoid being corrupted by malevolence and causing even greater strife. Because he has never left his hometown, he is curious about things he has never experienced before, but his sheltered upbringing also makes him naive. Due to his natural earnestness, Sorey is also a bad liar, evidenced when Sergei Strelka questions him in Lastonbell. He is generally calm and easygoing, taking everything in stride and making the best of things. He puts others first, to the point of self-sacrifice; when Alisha is his Squire, he does not tell her that his vision is failing because he does not want her to worry. He has a tendency to get excited about ancient history, particularly ruins.

Sorey uses a short sword with a self-taught skill from hunting prickleboars. While he is often right-handed, he is also shown to be extremely versatile in battle, quickly switching his grip or hand to execute an arte right before switching back. After becoming the Shepherd, Sorey gains the ability to purify hellions and armatize with seraphim. His mystic artes are Bolt Tempest and Divine Wrath. He also shares a mystic arte with Rose known as Ultima Elementia.

Sorey appears as the nexus of the exoflected Glenwood who meets Ix and Mileena when saving them from a monster attack. After having the situation explained to him, Sorey agrees to help the party locate and destroy a shimmera glass. Along the way, Sorey is excited to marvel at various ruins he had only read about even though some of them are different ones mixed together. He also picks up on Ix’s suspicions that Sorey might secretly resent them for taking him away from his home. The Shepherd quickly dispels their worries by his optimistic outlook at having a whole new world to explore and the satisfaction knowing his original self is still continuing his journey.

After Lailah and the other seraphim reunite with the party, they begin to ponder the possibility of reacquiring Armatization with an Overray mirrage. Although Sorey and Mikleo discover the catalyst for their Armatus, they have difficulty maintaining it for more than a few seconds. Aster Laker, who had been observing them, then offers a spirit ring that stabilizes the fusion. Later on after more research is put into the spirit ring, Aster theorizes the combined Armatization of all four main elemental seraphim, the same one that appears in Tales of Zestiria the X.

As a nexus, Sorey’s emotions and memories influenced the exoflection of his world. Because of his high resonance and growing up seeing seraphim, he felt those experiences as normal which resulted in seraphim and hellions being visible to everyone in Tir Na Nog.

When not in the active party, Sorey enjoys exploring ruins with Mikleo and they even form a club out of it. They also become students under Raine Sage who happily endorses their activities learning the histories of other worlds.

Destiny of the Twin Stars

In a Fractured Dimension, the seraphim inexplicably became visible to humans, and war breaks out when humans blame the seraphim for a series of disasters coinciding with their appearance. Though he tries to stop the conflict, Sorey is afflicted by a mysterious black mist and begins to change in personality. He was sealed away by Mikleo at his own request, but many years in the future, the seal breaks and Sorey escapes. He discards his Shepherd's garb and names himself the new Lord of Calamity, leading a group of seraphim to destroy humanity.[5] 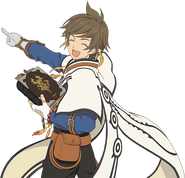 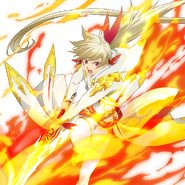 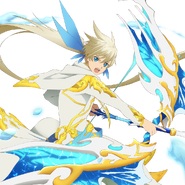 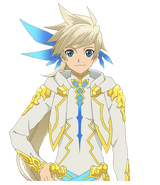 Reference sheet for Water Armatus, as shown on the Tales of the Rays Twitter.

Sorey as the Lord of Calamity in Tales of Asteria. 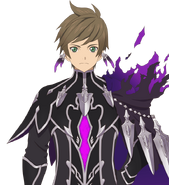 Sorey's portrait art as the Lord of Calamity in Tales of Asteria.

Reference sheet for Sorey as the Lord of Calamity in Tales of Asteria.

Concept art of Sorey as the Lord of Calamity in Tales of Asteria, as shown in the Tales of YouTube Channel 2021.