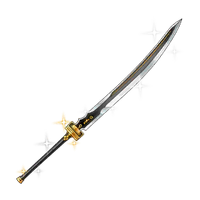 Stormhowl (號嵐, Gouran?) is the name of a legendary sword in Tales of Berseria. Its origins shrouded in mystery, it is said to be able to level mountains with the howling winds from a swing. It is given the appellation of the God Blade (神刀, Shintou?). It is Kurogane's goal as a blacksmith to surpass Stormhowl with swords he dubs Stormquell, the pursuit of which eventually turns him into a daemon.

The sword has been passed down through the Rangetsu family, finally ending up in the hands of Shigure Rangetsu as the family head. As other members of the family, Shigure's younger brothers, including Rokurou Rangetsu, get lesser blades, also named Stormhowl, but not as strong. At one point, Shigure and Rokurou fought, ending with Shigure shattering Rokurou's Stormhowl. Rokurou eventually grows strong enough to defeat Shigure in a climatic clash at Mount Killaraus. As one of his last requests, Shigure gifts Rokurou Stormhowl. Rokurou then uses the blade to mark the spot where Shigure died.

v • e • d
Lore for Tales of Zestiria and Berseria
Community content is available under CC-BY-SA unless otherwise noted.
Advertisement