Suzu Fujibayashi (藤林 すず, Fujibayashi Suzu?) is an optional protagonist in Tales of Phantasia. She is the granddaughter of Ranzo Fujibayashi, current chief of Ninja Village. Though young, she has been trained in the way of the ninja her entire life, and is next in line to be chief. She is an non-playable character in the original Super Famicom version of the game. However, in all subsequent versions, she is recruitable if her sidequest is completed.

The future Chief, Suzu knows the price of betrayal and sets out to try to convince some wayward ninja to return back to the Village and stop serving Dhaos. When conversation fails, Suzu knows what she must do and moves to attack the ninja. Noticing Cress Albane, Mint Adenade, Claus F. Lester, Arche Klein, and Chester Burklight coming, however, all of the ninja flee inside. Caught in an electrical trap, however, the party saves her, though Suzu flees immediately after. When Cress saves her from the rogue ninja, however, Suzu thanks them one last time before leaving.

If the party heads to the Ninja Village in Treantwood, the party meet Suzu again, who invites them into the village. The party falls victim to a bunch of traps, which Suzu explains is their way, but eventually meet with Suzu's grandfather Ranzo, the chief of the vilage. Ranzo tells them the role of ninja and ask them to find Suzu's parents, Dozo and Okiyo Fujibayashi. Cress eventually meets them at the end of Euclid's tournament. If Cress loses against them, Suzu will appear in a burst of leaves to defend Cress and tries to convince her parents to stop. When they do not, Suzu uses the Alter Ego Technique (分身之術, Bunshin no Jutsu?) to split into four copies.

Suzu's parents attack where they believe she is but only succeed in killing each other, with a little aid of one of an explosion of Suzu's making. With their last breaths, they forgive her and say they are proud of her, and Suzu leaves to steel her heart. If Cress manages to defeat them, Suzu will still appear, but the ninja Cress defeats are revealed to be copies. Suzu's attempts to convince them to stop causes her parents to fight their possession long enough so they could commit suicide in order to atone for their sins. Cress tries to comfort Suzu, who teleports away in order to steel her heart. Upon returning to the Ninja Village, Suzu joins them on their quest.

At Alvanista, the party is tasked with finding the three weapons that defeated the three ancient civilizations of Thor, Fenrir, and Odin. Upon claiming the Fire sword, Flamberge, and Ice sword, Vorpal Sword, they return to Treantwood, where the party subdues Origin. Origin creates the Eternal Sword from the two swords and the power of the "Diamond" pact ring. The party travels to Arlee. As her friends talk among themselves, Suzu stands atop the inn's roof and questions the ninja resolve to not feel. She asks her parents if that makes her weak, but she resolves to stand by her friends and fight with her heart, in order to live without regrets.

Before going to Dhaos, if they return to the Ninja Village and speak with Ranzo, Suzu can undergo training at the Cave of Tribulations, where she must answer questions about the "Ninja Code" and fight five foes in a row. She is asked by Kosuke if she would eliminate a target's spouse. Suzu responds that she would remove a potential future threat and proceeds to defeat Kosuke. Jinbachi asks her if she would betray a friend at her master's behest, and Suzu responds that she would as she has to obey her master, and she defeats Jinbachi in combat. Juzo asks if she would kill an innocent bystander who just happened to see her, and Suzu replies in the affirmative, as a ninja's existence must remain a secret, and then she bests Juzo. Saizo asks if she would reveal her master's misdeeds if possible, and Suzu says that she would not, as loyalty to her master is paramount, and she proceeds to defeat him as well. The final ninja, Sasuke, questions if she could raise her blade against her parent and kill them, and Suzu hesitantly asserts that she would if it were her mission.

At the end, she finds a letter from her father that congratulates her for her success but says that though she understands the way of ninja, she still lacks one thing, and if she finds that she will be ready to become the next Chief. Suzu then obtains the "Kuroyuri" weapon. Using the Eternal Sword, they break the time barrier that surround Dhaos's castle. Meeting him one final time, the group defeats him once and for all. Suzu knows that this would be the last time she sees her friends and tries to hide her tears as a ninja would, but it is too hard. She says her farewells and leaves in a swirl of leaves.

Tales of Phantasia: The Animation

In the anime retelling of the events, Suzu never really joins to the other Heroes of Eternity. When the party attempts to contract Origin, Chester and Arche stay behind, but Suzu warns them of an incoming threat as she herself heads forward. Suzu comes in time to interrupt Dozo's assault on Treantwood with her Raiden arte, though Dozo quickly defeats her in spite of her efforts. During the final episode, as the others assault Dhaos's castle, Suzu stays outside. She wards off the ninja who attempt to intervene, including her own parents.

Suzu plays quite an important role in this game as one of the Heroes of Eternity that guide central protagonists Mel and Dio on their quest. They find her in the Ninja Village, having already sensed and expected them as well as Norn. Norn asks Suzu to allow them into the Cave of Electricity but also to tell them what she gained by traveling with the other Heroes. Suzu tells them that, when she traveled with them, she was a young girl and, as a ninja, she closed her heart and mind by the ninja code. She tells them that she learned about people's hearts and emotions and that being an adult came from many meetings and many partings. After giving them the passcode to the cave, she tells them that relationships between people are strange things, possibly the work of fate or something that needs to be sought and wishes them a wonderful encounters. Right before they leave, however, Suzu stops Couleur and recognizes that Couleur is a shadow. Being revealing Couleur's purpose, which has something to do with the children, Suzu decides to hold and peace and not question.

After meeting with more Spirits, they return to Suzu for the key to the Forest of Spirits. Suzu tells them a haiku by the poet Kobayashi Issa: "come and play with me, orphan sparrow" (われときて あそべや おやのない すずめ, ware to kite asobe ya oya no nai suzume?).[1] Suzu says that the author is one who lost his mother while young and yearned for a parent's love, and yet she states that the sparrow, though thought of as nice to humans, is actually quite wary. She tells Mel and Dio that she is drawn to these words and their various meanings, and also tells them that it is the passcode to the Forest of Spirits.

Toward the end, there is an image of a conversation between Suzu and her parents. Suzu pleads with her parents to stop, but they cannot due to Dhaos's influence. Her parents tell her that her clan's sins must be ended by their clan, and they ask Suzu to kill her. Steeling herself, she begins to fight her parents. In the darkness, Suzu ruminates that it is a ninja's destiny, and that all people live with scarred hearts, but Meltia Bandi questions if Suzu knows anything about hearts, if her own is so enshrouded with darkness that she wonders if even Suzu can see it.

In order to defeat the Demon King Xex, Claus's descendant, Fulein K. Lester, and his partner Macaron bring forth Claus and his allies into the future for help. After summoning Chester, the party decide to head for the Ninja Village to look for something of Suzu's, as they do not know where the "Unicorn Horn" is to summon Mint. After thwarting Kerse from killing all of the Ninja, the Master gives them Suzu's "Kuroyuri", which Macaron uses to call for Suzu. She comments that the future is not so different and is relieved to see that her friends are all right.

Suzu comes across as cold and unfeeling, often brought upon by her attempt to adhere to the ninja ideal of masking one's emotions. Though internally strong, there are times where she questions her path and even the reasons why she attempts to distance herself from her emotions. Suzu also has a sweet tooth that belies her cold demeanor.

Suzu, being a ninja, specializes in swift attacks but lacks a strong defense. As a user of the Igakuri School of Ninja Arts (伊賀栗流忍法, Igaguri-ryuu Ninpou?), her artes, though few, cover a wide variety of needs and make Suzu a versatile addition. Her attacks range from front line strikes such as Hell Rush to long-ranged attacks such as Crow Blade, as well as effects that none of her allies can replicate, such as her item-stealing Secret Thief. She can also summon a giant frog in Summon: Jiraiya.

Suzu will appear in town if Caro Orange dresses in a Ninja costume. Julio Sven and Caro are able to recruit her to travel with them and take quests from her. Caro can dress in a Suzu costume by combining a female Ninja costume with the "Chizakura Blade" root item.

Suzu joins Julio and Caro in Mission 17 at the Magitech Research Lab. She is able to be used as a party member after the completion of the mission. Caro can dress in a Suzu costume by combining a female Ninja costume with the "Chizakura Blade" root item.

Suzu is referenced with the "Nintou Chizakura" cameo weapon, which allows the character who picks it up to use her Manjushage arte. 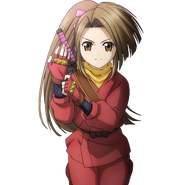