Sylph (シルフ, Shirufu?) is the Spirit of Wind, also representing one of the four cardinal elements of the Tales games. Sylph has appeared in several games of the series as a character or cameo, and it is able to be summoned through the Sylph arte. Sylph is opposed by Gnome, the Spirit of Earth. Sylph is replaced by the Sacred Beast of Wind, Wontiga, in Tales of Rebirth and Grim Sylphie in Tales of Graces. In most games, the Sylphs are a collection of sprites or fairies, but in certain games, the Spirit appears as a single entity.

The Sylph make their first appearance in Tales of Phantasia as a Spirit. The Sylph are the Wind Spirit and appear as small sprites inhabiting the Lone Valley. Collectively the Sylph, they are one of the first four Spirits the party must face before they can meet Maxwell, the "Lord of the Four Elements". Miasma, the wind of Daemonium, drives the Sylph into a berserk state, resulting in the need for the party to battle them as they climb their peak. Once the miasma is dispersed, the Sylph appear before the party and direct them to Martel. The Sylph require the "Opal Ring" to forge a pact, granting Claus F. Lester with the power to summon them in battle. In battle, there are various types of Sylph, but all can launch cutting gales of wind, as well as spin themselves in a mini-cyclone to ram enemies. They are also able to cast various magic such as Storm and Cyclone.

The Sylph appear in Tales of Phantasia: Narikiri Dungeon as the the Spirits of Wind and are one of the twelve Spirits that must be fought during the Ordeal of Spirits. They appear on the final level of the Valley of Wind in AC. 4203 and are the boss of the dungeon. They teach Mel and Dio the heart of wind: Free Mind (じゆうなこころ, jiyuu na kokoro?).[1]

The Sylph appear in Tales of Phantasia: Narikiri Dungeon X as Spirits. In the story, Mel and Dio must collect their essence to save Vahalla City. The Sylph appear as two separate beings that are based on the two types of Sylph from the original Tales of Phantasia. Like in the original Narikiri Dungeon, the Sylph are met in AC. 4203, but they are encountered in the Lone Valley instead. Upon defeat, Mel and Dio collect their essence. After completing the first quest of the story and obtaining the "Opal" jewel in the Limestone Cave, the party may challenge the Sylph again in order to allow Claus to summon them in battle.

The Sylph appear in Tales of the World: Summoner's Lineage as a unit Fulein K. Lester can summon. Fulein is directed by the King of Euclid to Lone Valley, where Fulein finds Mark Ginihle being attacked by Sylph. Aiding him, Fulein obtains the "Sylph Ring", which his ancestor, Claus F. Lester, used to form a pact with Sylph and thus makes his own pact, now able to summon Sylph as a unit in battle.

Sylph appears in Tales of Destiny as a special attack summoned through the consumable item "Sylph", which is described as an ancient weapon capable of calling forth the wind spirit. The Sylph of Tales of Destiny appears as a harpy-type creature.

Sylph appears in Tales of Eternia as one of the Greater Craymels and one of the Primary Craymels of Inferia. The Wind Craymel governs the use of all Wind-elemental spells. Unlike most appearances, the Sylph in Tales of Eternia is male. Sylph makes his home in Sylph Cavern, south of Barole. He has a rather playful personality and is very lax about things, though he agrees to join after Ras humbles himself. Sylph teaches the party the "Aerialboard" Craymel Arte, which allows the party to traverse over land and sea as long as Wind Craymels are present. He has a bit of an animosity with Gnome, being opposite elements. Sylph can be summoned through the arte Sylph.

In battle, Sylph is aided by two "Arms" and attacks through his bow, flying and teleporting around the screen. He is capable of casting a variety of Wind-elemental spells such as Wind Blade, Air Thrust, and Cyclone. He also has three artes related to his bow: Wind Arrow, where he releases waves of a small arrows that spread the farther the enemy is from him; Sagittarius Arrow, where he releases an arrow diagonally downward that can lower hit-ratio; and Sylphid Arrow, where he launches an arrow across the screen. 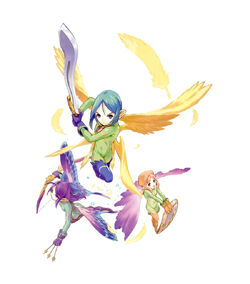 Sylph, the Heavenly Messengers, appear in Tales of Symphonia as one of the Sylvaranti Summon Spirits. Sylph is actually three separate beings, Sephie (セフィー, Sefii?), the apparent leader, carries an over-sized sword, while Yutis (ユーティス, Yuutisu?) uses a bow and Fairess (フィアレス, Fiaresu?) defends with an over-sized shield. Residing in the Balacruf Mausoleum, they are the Summon Spirits of Wind. They are able to be summoned through the Summon: Wind arte, which will display the Sylph's name at the top of the screen.

In battle, Sephie is the main physical attacker, while Yutis provides support at a long range, and Fairess casts various Wind spells. Sephie can cast Wind Blade and use an arte called Rising Wind, where she raises her sword into the air and rises on a spiral of wind, similar to Decisive Slice and Down Burst. Yutis can use Wind Arrow, where she fires a horizontal stream of arrows, and Spit Arrow, where she teleports into the air and fires arrows downward, while Fairess casts Wind Blade and Air Thrust.

In reference to their position as the Summon Spirits of Wind, their name is attached to monster grimoires that teach Wind-elemental artes: "Sylph's Circle", which teaches Healing Circle, and "Sylph's Mischief", which teaches Turbulence.[2]

Sylph is mentioned in Tales of the Abyss as the aggregate sentience of the Third Fonon, the Fonon of Wind. Sylph's name is used to represent the fifth day of the week, Sylphday, as well as the second and eleventh months, Sylph Decan and Sylph Redecan. In addition, Jade Curtiss can obtain a spear named "Sylph". 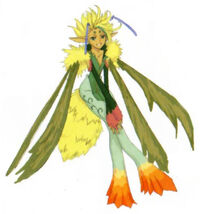 Sylph appears in Tales of Vesperia as a Spirit. Testing the party's strength to see if they could defeat Duke Pantarei, the Entelexeia Khroma fights the party in the depths of Relewiese Hollow. After her defeat and death, the party uses her apatheia to turn her into a Spirit through the process of Spirit conversion. Once the party leaves, the Spirit reappears, and Estelle names her "Sylph", meaning "Binder of Winds". Sylph then helps Ba'ul carry the party to safety. Sylph often translates for Gnome, who is unable to speak normally. In the PlayStation 3 port of the game, Sylph makes an appearance in Estelle's mystic arte Ultimate Elements. Sylph follows Gnome by trapping all of her enemies in a cyclone. 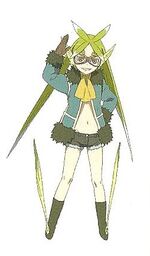 Sylph appears in Tales of Xillia as one of the Four Great Spirits under the personal control of the Lord of Spirits, Milla Maxwell. It is noted at several points during the story that Sylph styled the human catalyst of Maxwell. At the start of the events of the story, Sylph is imprisoned within the Lance of Kresnik. Sylph reappears in Tales of Xillia 2 as a helper of Milla, acting faithfully under her command. 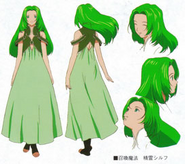 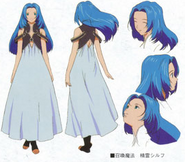 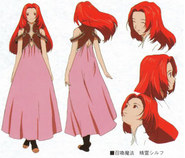 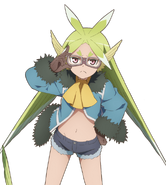