"Tabatha" redirects here. For the character in Tales of Berseria, see Tabatha Baskerville.

Tabatha (タバサ, Tabasa?) is an android girl who, according to Altessa, was created by him.

It is hinted that Tabatha was an early attempt to house Martel's consciousness as an alternative to breeding a perfect Chosen. The experiment had initially failed, though. At some point, she became Altessa's maid, who escaped from Cruxis. The first time she is seen is when the party visits Altessa to ask him to make an Exsphere for the absent Presea Combatir. When he refuses and tells Tabatha to throw them out, she shows them the way out and explains why he is hostile. After Ozette is destroyed because of Altessa, Tabatha asks Presea to forgive Altessa for what he did in the past before going to help her master. Later on, she takes the responsibility to look after Mithos while the party continues the journey.

At the same time as the Kharlan Tree goes berserk in Sylvarant, an earthquake occurs throughout Tethe'alla. Tabatha and Mithos are outside as this happens, and a giant rock falls toward Tabatha. Mithos pushes her away, taking the blow instead, saving her. A time afterward, the party comes to ask Altessa to cure Colette from a rare angelic sickness, and when it is revealed that she is out of danger, Tabatha prepares dinner. Unknown to her, though, sleeping powder is mixed into the dinner by Zelos Wilder, causing everyone to fall asleep after a short time. When Tabatha and the rest eventually wake up, they go outside to find Renegades killed by Mithos, who reveals himself to be the leader of Cruxis. Tabatha recalls Mithos saving him, but Mithos, enraged at her similarity with his sister Martel, shoots her down.

After Mithos reawakens and destroys the Tower of Salvation, causing Heimdall to be damaged, Tabatha appears again, having recovered and realized Mithos's betrayal. She now speaks more like a living being, rather than with the artificial inflections that emphasized her status as an android before. This is due to the hinted fact that Martel's consciousness transferred from Colette to her. Due to this, she can not be seen at Altessa's house later in the game. This is how she knows that at the end, Tabatha is seen before the destroyed Tower of Salvation, welcoming the Great Seed to surround her. She then takes the Great Seed and therefore all of the failed Chosen souls and therefore the rest of Martel's soul, into her and becomes the vessel for the spirit Martel, ironically letting her fulfill her role as an artificial vessel.

Because she is an android, Tabatha never shows any real personality outside of what she is programmed to do. Because of her programmed mind, she is incapable of recognizing Mithos's betrayal, only stating that he saved her because he is a good person. 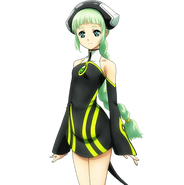