Tales of Eternia (テイルズ オブ エターニア, Teiruzu obu Etaania?), also known as Tales of Destiny II in North America, is the third Mothership Title in the Tales series. Like the Tales games before it, it is a 2D anime-style role playing game. Its real time Linear Motion Battle System is far more advanced than those found in its two predecessors. Tales of Eternia is the first game to have one of its ports released in Europe but not in North America. Its characteristic genre translates to "Eternity and Bonds RPG" (永遠と絆のRPG, Eien to kizuna no RPG?).

Reid Hershel, along with his childhood friend Farah Oersted, notice an unusual change in the color of the Orbus Barrier coupled with the flight of a strange ship from Celestia. When they go to see what happened, they meet Meredy, who is dressed in a strange fashion and speaks a bizarre foreign language, and her pet Quickie. Consequently, Reid and Farah visit their childhood friend, Keele Zeibel, in search of answers regarding the identity of Meredy. Reid learns that she speaks Melnics, an ancient civilization's language. After traveling to Morle, the group receives a special translation earring that allows communication with Meredy.

They continue to Inferia City, the global capital. The group asks the King of Inferia for help, but Reid is accused of spreading fear and confusion throughout the land; the punishment is a death sentence. The princess wants to know more about what they have to say, so the group is released. Reid explains the situation, and the leaders of Inferia hold an organizational conference. The Inferians announce they will uncover the Bridge of Light and stop the Celestians from executing the Grand Fall by taking aggressive military action. The party is aided by Efreet, Undine and Sylph; the group is lead by Rem to the Bridge of Light, which resides atop the highest mountain in Inferia. After climbing the mountain, they locate the Bridge of Light in its stone sanctum. Reid's group is confronted by Ras, who tells them that his real name is Rassius Luine, a senor knight loyal to the Kingdom of Inferia. Ras loses to them in combat, and watches the group escapes via the Bridge of Light to Celestia as Inferian reinforcements arrive.

Upon arrival in Celestia, the group is greeted by the citizens of Imen, Meredy's hometown. They travel by rail to the ruined city Luishka; a professor there examines Reid's body as he houses an unknown fibrill, or magical energy. The group discovers the Greater Craymel Gnome in a nearby cave, and they enlist his help. Reid stumbles upon Chat's hut, and the party is accepted into her crew after a series of puzzle-based tests; the group now has access to the sea-based form of transportation. Using the Van Eltia, they reach Peruti, the frozen town near the dominion of Greater Craymel Celsius. Reid climbs the nearby mountain and helps Celsius regain her sanity, saving Peruti. Reid's group is invited by Max to join the Shileska liberation army in order to stop Balir, the cause of the Grand Fall. However, Meredy senses pain and suffering from Imen, so Reid decides to return there first. When the party reaches Imen, the city is in ruins with the majority of its citizens killed.

At the technologically advanced city of Tinnsia, Reid meets with Ayla and Max, the leader of the Shileska liberation army; Max joins them in their journey. After finding the Greater Craymel Volt trapped in a machine at the Ruins of Volt, the group frees him and receives his power. Using the Craymel Cannon combined with the support of Shileska, the group manages to break through the fleet loyal to Balir. Infiltration of Balir Castle leads to Shizel, the ex-Queen who is ruling in place of Balir; Reid’s group is forced to retreat due to the powerful Dark Aurora arte of Shizel. After improving the Van Eltia and enlisting the help of Greater Craymel Shadow, Reid is given the Divine Aurora arte by Seyfert, the god who created Eternia. Seyfert wishes to preserve his creation, while Nereid desires the destruction of both planets; only Reid's Divine Aurora Arte can defeat the Dark Aurora Arte given to Shizel by Nereid.

The group is now free to travel between the two planets via the Orbus Barrier using the Van Eltia. The group recruits the Greater Craymel Rem at Regulus Knoll in preparation for the final confrontation at Shizel's Castle. Both Shizel and Nereid are defeated by Reid, who uses his Aurora Arte to counter that of Shizel. However, the Grand Fall continues on unabated despite the banishment of Nereid. Reid's group is forced destroy the Seyfert Ring, which forcefully connects Inferia and Celestia, using the combined power of the two Aurora Artes; this action stops the Grand Fall, but the two worlds drift apart and the party is split. Despite the separation, Chat's modified Van Eltia can fly from Inferia to Celestia, reuniting Reid with his allies.

Tales of Eternia carries on the tradition of the Linear Motion Battle System (LMBS), a system that is somewhat similar to a 2D fighting game. Commands are entered in real time, and both allies and enemies act out their orders in real time in the 2D plane. Normal attacks and special techniques are usually executed instantly, but spells have a chanting time that increases with the complexity of the spell. Unlike the previous two games in the series, Tales of Eternia executes spells in real time, probably due to the increased graphical capabilities of the PlayStation console. Therefore, spells no longer act as interrupts that freeze time, so spell effects can be dodged and evaded if the player is skilled enough, adding another dimension to the gameplay. Future games in the series would choose to retain the real-time chanting and casting system for spells.

Battle strategy options, such as individual character commands and party orders, have been slightly expanded, but their functionality remains essentially intact. Much like its predecessors, Tales of Eternia gives the player a large degree of control over computer-controlled allies and the techniques they use. Since the player only directly controls one character at a time, all other characters are governed by the general rules of AI behavior set by the player before and during battle. During battle, the player can switch which character he or she is controlling, while issuing specific orders to other allies to execute certain techniques on command. However, totally controlling all of the characters' actions throughout a battle requires a large amount of micromanagement, and most players end up delegating control of allies to the AI during normal encounters. During important and difficult boss battles, the player may choose to take direct control and issue more forceful commands in order to keep the party alive and functioning at maximum efficiency. 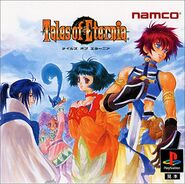 Cover for the Japanese PlayStation version of the game. 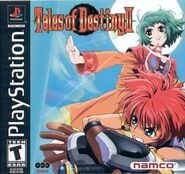 Cover for the North American PlayStation version of the game.

Cover for the European PlayStation Portable version of the game.