Tales of the World: Radiant Mythology (テイルズ オブ ザ ワールド レディアント マイソロジー, Teiruzu obu za Waarudo Redianto Maisorojii?) is a spin-off of the Tales action role-playing game series for the PlayStation Portable. Like some of the previous games that bear Tales of the World in their titles, this game is a crossover title featuring characters from various Mothership Titles. Unlike other games in the Tales of the World Series, however, this one has been released in both North America and Europe. The game's characteristic genre translates to "For Your Sake RPG" (きみのためのＲＰＧ, Kimi no tame no RPG?).

As always, the Tales of the World spin-offs add Tales characters from entries in the main installments. They will assist the player throughout the game to stop the villain from destroying the world. The world of Terresia is under assault by the "Devourer", which seeks to consume its mana and leave it barren. A guild named Ad Libitum exists throughout the remnants of the world to protect it from the consuming monster, though not so successful. As a last resort, the world's life-giving tree uses the last of its power to create a Descender, the player's own character, which is born to protect the world who gave it birth. The hero, after being awakened by a strange creature named Mormo whose own world was destroyed by the same threat, learns of the danger to the world's World Tree. Upon hearing a scream, the player rushes to discover that a girl is being attacked by a soldier. After rescuing the girl, she introduces herself as Kanonno, a member of the guild Ad Libitum. This guild seeks to help the people of the world, fighting injustice and oppression. With no better leads, the player and Mormo set out to join Ad Libitum, hoping to learn more about the location of the Devourer.

As the time goes, they eventually manages to defeat Ganser, who is terrorizing the town Ailily, and reveal the real master mind, Widdershin, another Descender from a world named Gilgulim, which is the Devourer. He tries to kill the player, but fails as the hero neutralize the power and destroys a node of Gilgulim. Widdershin then disappears, and will not be seen before later. Ailily is saved, and the road to Doplund is opened. In Doplund, there have occurred a lot of earthquakes, and the Descenders go to investigate it, eventually finding more nodes all over the region. In the end, they meet Widdershin again when they are forced to fight and kill one from Mormo's own world, Yaoon. When they return, they find out that the road to Gavada is completely repaired, and head there to defeat a monster that is blocking it.

In Gavada, they encounter yet another problem; the government's new assistant, Aurora, is giving the once poor town a luxurious state they will not take away. Because of this, Ad Libitum is not worth much than a bunch of handymen. The player and Mormo come here to look for a scientist there, Harold Berselius, who may help them in their quest of protecting the world. Harold, however, has disappeared and not come back for an awfully long while. Because of this, the Descenders start a search-and-rescue operation, and eventually find the female scientist. Later, they are standing face to face with a Gilgulim node in Gavada, but after destroying it, Gavada falls down to its poor state like before, forcing people to once again live in the real world. Kanonno, however, has regained her memory and run away.

In hope to find the source of Gilgulim's nodes, the duo goes back to Doplund, where they in the end find Kanonno, who tells them about her past; she used to be a Descender of a world called Pasca. In desperation to save her world, Kanonno destroyed the whole humanity there. Regretting the action later on, joined Widdershin, who promised her world back if she helped her to swallow other worlds. When she was about to weaken Terresia's World Tree, however, it was too strong and sent her away, losing her memories. The player and Mormo are shocked about this, but it becomes worse when Kanonno's wish for getting Pasca back makes a new node of Gilgulim sprout out, and she challenges the player for a fight to protect it. After the battle, she returns, realizing that it is with the player and Ad Libitum’s side she wants to be on.

When the player, Mormo and Kanonno go to the Foot of the World Tree to stop the mana consuming, they meet with Aurora, who tells them about her own past as a Descender. After defeating her in battle, Kanonno says that she will try to stop the mana in Terresia from flowing over to Gilgulim while the player and Mormo go to stop Widdershin. They promise that they will meet again, and that Kanonno is sure they will make it. After Widdershin is defeated, she meets up with them again, and they, along with all Terresians, witness the mana from the worlds Gilgulim consumed being freed. They now are making World Tree seeds in order to restore their worlds. Kanonno finds the seed of her world Pasca, and likewise Mormo finds the seed for Yaoon. After saying goodbye to the player, who is going back to the Terresian World Tree to sleep, Kanonno and Mormo leave Terresia.

The gameplay resembles in many ways that of an MMORPG, albeit without being online. Players accept quests at the local guild office from a selection of five different choices at a time. Quests include defeating certain monster types, mining or harvesting certain raw ingredients, or crafting certain goods. Completing these quests rewards the player with Fame Points and Gald. Upon reaching certain levels of Fame Points, a new "Story Quest" is unlocked, which leads to new in-game events once completed. The player's character is fully customizable with the equipment available through quests and stores, and changing it affects both stats and visual appearance. The typical Tales crafting system is also in the game, allowing the player to further customize his or her equipment. The game uses the Flex Range Linear Motion Battle System found in Tales of the Abyss. This system allows the player character to move freely across the field.

The opening song for the Japanese version is named "Hikari to Kage" (光と影?, "Light and Darkness") by Kana Uemura, who also sings the game's theme song, "Kamihikouki". The opening version outside of Japan is, similar to Tales of the Abyss, the same opening song without lyrics. Most of the soundtracks in Tales of the World: Radiant Mythology are from the soundtracks of past games, but it does have some soundtracks of its own, including character songs, location songs, event songs, and battle music. 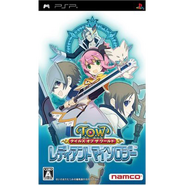 The cover for the Japanese version of the game.

The cover for the North American version of the game.