Aselia Wiki
Register
Don't have an account?
Sign In
Advertisement
in: Tear Grants, Tales of the Abyss characters, Protagonists
English

Tear Grants (ティア・グランツ, Tia Gurantsu?), birth name Mystearica Aura Fende (メシュティアリカ・アウラ・フェンデ, Meshutiarika Aura Fende?), is the main female protagonist in Tales of the Abyss. She is a Seventh Fonist in the military wing of the Order of Lorelei, the religion overseeing Yulia Jue's Score. She lost both parents when she was still an infant, and has been raised as a warrior ever since. Tear is staid and reserved, giving her a cold air, but when not chastising Luke, she is polite and respectful to all, particularly to those in positions of authority. She also has a secret weak spot for cute things. A certain incident leads to her joining with Luke on his adventure.

The Fende family was originally from the island of Hod which was destroyed in the Hod War that left a large portion of the continent devastated by its effects. The island fell into the Qliphoth, taking both Tear's mother who was pregnant with her at the time and Van Grants, her older brother, into the miasma-filled world under Auldrant's crust. The only reason they were not killed from the miasma is because Van sang one of Yulia Jue's Fonic Hymns, which saved them from the poisonous gas.

Raised by Van, the Commandant of the God-Generals, and her adopted grandfather, Mayor Teodoro of Yulia City. She quickly joined the Order of Lorelei when she was of age. She is a Locrian Sergeant in the Oracle Knights "Intelligence Division", a section of the Oracle of Lorelei that presides over the Score. Tear's detached demeanor came from her mentor, Legretta, Van's assistant and one of the six God-Generals. To this day Tear considers Legretta the reason why she became so cold, concise and calculating, as well as wanting Van's approval.

It has been said that Tear and her family are the descendants of Yulia, the original fonist who discovered the Seventh Fonon and as a result, Tear is able to use it. However, unlike those that are able to use the Seventh Fonon, she is currently the only one to date save for Yulia that is able to use the Grand Fonic Hymn, a compilation of seven Fonic hymns, that provide its recipient with increased statistics which makes them more or less invincible for a time.

At the beginning of the story, Tear discovers that Van is determined to destroy the main world, and takes an assignment from Grand Maestro Mohs to locate the Seventh Fonstone in order to get to the Outer Lands. Along the way, she crosses through a portal and breaks into the Fabre manor where she finds Van, feigning as young Luke fon Fabre's swordmaster and mentor, and proceeds to attack him but Luke steps in the way, blocking her assault. Without either Tear or Luke knowing that he possesses the power of the Seventh Fonon, a hyperresonance occurs between them and sends the two into the Malkuth Empire. Once realizing that they are no longer in Baticul, Tear promises to get Luke back home and they set out not knowing that they are in enemy territory.

Just as they make it out of Tataroo Valley and hitch a ride on a passing wagon, they see Colonel Jade Curtiss's dreadnought chasing another coach across toward the Rotelro Bridge. The coach tosses out some explosive barrels which destroys their quickest way out, forcing Tear and Luke to take shelter in a nearby town known as Engeve, the main farming town of the Malkuth Empire. Once they pass the threshold of the city they find themselves drawn deeper into the plot that threatens to leave Auldrant in its wake.

Tear is a woman of average height with fair skin, blue eyes, and long, light-brown hair with a bang covering her right eye. She dons a feminine Order of Lorelei uniform that accents her figure while retaining a modest appearance. The uniform has a large collar and bears her shoulders, leaving the remainder of her arms to be covered by matching gloves that appear to have a separate layer of small white gloves attached to the ends of them. The emblematic musical staff adorns her attire, trailing down the center in a straight line. Beneath her coat, Tear wears maroon-colored stockings that yield her knife weapons hidden at the top. Her look is completed with a delicate pair of white heels to accompany her gloves, and her default rod is a similarly-styled weapon to that of the Order of Lorelei. Tear is noted by many characters to be quite beautiful; an early-game antagonistic Luke describes her as having a ‘pretty face but a terrible personality’, later-on amending this to describing her as ‘really beautiful’. These sentiments are shared by Guy, a man in Chesedonia that compares her to a great beauty, and a large number of patrons of the restaurant she waitresses at in Keterburg.

Despite a typically cold and serious demeanor, Tear has a soft spot for cute things, particularly Mieu, the bearer of the Sorcerer's Ring. She also has a fear of ghosts, which initially becomes evident when the group is making their way through the Abandoned Factory and is later hinted at again at Mt. Roneal. Tear is modest about her appearance in spite of it often being a topic of conversation, becoming embarrassed easily and scolding the other group members for such talk. She cares deeply about Luke, an affection that builds as the story progresses. The two grow to support each other despite their similar stubborn attitudes, and Tear ultimately confesses her love for Luke near the end of the story, after the battle with Van in Eldrant.

Tear is a Seventh Fonist capable of casting unique spells known as Fonic Hymns. While Natalia's healing artes focus on single targets, Tears utilizes area-based healing artes such as Healing Circle and Revitalize. Apart from being one of the primary healers of the game, the aforementioned Fonic Hymns also grant powerful offensive spells such as Judgment and Grand Cross. Similar to Legretta, she can also make use of Eclair de Larmes, Holy Lance, and Resurrection. While she primarily remains a long-ranged caster, she is adept to fighting up close as well.

Tear wields various staves and wands typical of the healer class, but her regular attack is unique in that her weapon fires out small orbs of fonic light a short distance, allowing her to keep enemies away. Some of her close-ranged artes consist of Nocturnal Light, Severed Fate, and Banishing Sorrow, which can be altered via FOF Changes into Inlay Nocturne, Fatal Circle, and Searing Sorrow, respectively. Tear is the only character who possesses spells that solely create FOF Circles, namely Invoke Ground, Invoke Aqua, Invoke Flame, and Invoke Gale.

Tear is a playable character in Tales of the World: Radiant Mythology, classed as a Priest with the "Mysterious Intruder" title. She appears along with Luke, having to cope with the latter's selfishness and arrogance because she feels responsible for taking him out from his safe mansion. While they use their time going around and look for a way to get home, they are in the end asked by Mormo to give them their help while they still are in Terresia.

They agree to this, and are afterward available to use as party members in the Ad Libitum chapter in Gavada. While staying there, she shows her interest for cute things, as she becomes obsessed with Mormo and the Gavada chapter's leader, Eugene Gallardo from Tales of Rebirth. It is stated that Luke and Tear reached Terresia though a hyperresonance reaction, much like what spirited them away to Malkuth in the beginning of the game. They also leave through another hyperresonance reaction, making many fans believe that, before landing in Malkuth, they came to Terresia, but forgot about it when they came back to Auldrant.

Tear and most of the Tales of the Abyss characters appear as playable characters in the sequel of Radiant Mythology. Tear is first seen when the Protagonist and the guild on the Van Eltia see her ship being attacked out on sea. Tear with Luke, Guy, and Jade flee to the Amell Caves and stay in there until they manage to recover from the attack. After the player gets the story mission to go save him and along with the others, Tear is located on the deeper end of the first level on the dungeon looking for Luke and Guy as a order from Jade.

After the player defeats Guy on the second level, she and Jade show up to prevent another fight from starting. She heals Luke of his injuries and then heads to the ship with the others to report to Chat and will be available to be called out into the players party. Later Tear and the Protagonist are forced to go with Leon Magnus to the Mescal Mountains to place an object to awaken Niata. There they are stopped by Barbatos Goetia and are forced to fight him. After defeating Barbatos, they place the object on the altar in the area, she returns to the ship with the others after. The staff uses throughout the entire game is her weapon the "Fonic Staff".

Tear appears in Tales of Crestoria's limited quest: "Battle Katz! Klash of Pawz". She is first seen at a lake, having lost her sense of direction and finding herself in the inner world. She is currently studying the Katz native to the area when she finds Misella working on her fighting style for a tournament and tells her that fighting with the intent of toppling her opponent is a terrible idea, advising her to instead rely on more passive charms. 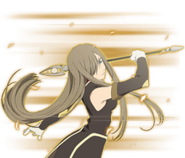 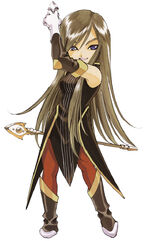