Teepo (ティポ, Tipo?, "Tipo") is a supporting character in Tales of Xillia and Tales of Xillia 2. He is a stuffed toy who travels with Elize Lutus, acting as both her mouthpiece and support in battle.

Teepo is an experimental, third-generation booster, designed to aid users of spirit artes achieve feats they were normally unable to. He was given to Elize during her time at the Labari Institute. The Institute was eventually dismantled, and Teepo went with Elize when Jiao took her to Hamil. Because of Elize's trauma, she considers Teepo to be her only friend.

Teepo joins Jude Mathis, Milla Maxwell, and Alvin when Elize does at Hamil. Teepo quickly integrates in with the group despite his mysterious nature as a flying, talking toy. To contrast Elize's shy, quiet nature, Teepo is loud, snarky, and argumentative. He speaks up and defends Elize when she does not. The group does investigate Teepo's origins and discovers what they believe to be merchants selling dolls like Teepo that are capable of speaking. Further investigation reveals the merchants to be scammers whose dolls use echore, which loses its ability to provide sound within hours. Nevertheless, Teepo remains optimistic.

Eventually, the group makes their way to Xian Du, where Teepo is kidnapped by Exodus agents. Elize and Alvin give chase, but they are unable to prevent the Exodus agents from ripping out Teepo's memory data. Teepo's true nature as a booster is revealed. Rather than existing as an independent being, Teepo is a machine designed to aid Elize's spirit artes at the cost of shortening her lifespan, while his personality is a reflection of Elize's inner thoughts. All of his words and actions are actually things that Elize herself feels. The Exodus agents essentially reset his parameters to their default state, resulting in a blank, monotonous slate. Elize has difficulty comprehending that Teepo is a side of herself rather than her friend and treats his personality reset as a death. Elize's anger and frustration at the world turn Teepo's normally jovial nature dark and acerbic, spitting out words that harm her friends. When Elize realizes that she has to take responsibility for Teepo's actions after particularly harsh comments directed at Leia Rolando, she acknowledges that she still needs to grow.

As Elize becomes stronger as a person, Teepo's personality rebuilds itself to what it was before. The tone of his and Elize's relationship changes afterward. Their words begin to mirror each other as Elize grows more comfortable expressing herself. Elize also shows embarrassment at some of Teepo's antics since the group knows the truth behind his actions. At the end of the group's adventures and trials, Elize eventually puts Teepo away, no longer needing him to speak for her. 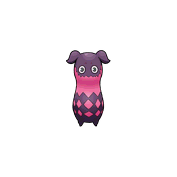 Though Teepo was put away at the end of their original journey, Elize pulls Teepo out once more when her class goes on a goodwill ambassador trip to Elympios since her friends wanted to show off their own stuffed toys. His presence ends up being useful when Exodus attacks during this trip, giving Elize's spirit artes the power necessary to be combat capable. Elize and Teepo join up with Ludger Will Kresnik and his group when they investigate the attack, and Teepo remains at Elize's side during this new journey.

Teepo is a small, purple and pink squishy toy with green eyes and ears that are commonly mistaken for horns. He also has two cone-shaped legs and a tail. In contrast to the shy, reticent Elize, Teepo is loud, boisterous, and outgoing. He is free with his words and affection, eventually revealed to be a manifestation of Elize's own feelings. He speaks what Elize either cannot or will not, much to her embarrassment, and acts as a window to Elize's heart. When his memory data is taken, Teepo reverts to a cold, mechanical personality, though he gets better as the game progresses. The dynamic between Elize and Teepo shifts until they words often mirror or play off each other, much more in agreement than before. In Tales of Xillia 2, Teepo is now a complement to Elize's new, outgoing personality as opposed to the contrast he was before.

Teepo acts as an additional, intrinsic weapon for Elize during battle and is an integral part of both her special ability, "Teepo Switching" (スイッチングティポ?, "Switching Tipo"), and her partner skill, "Teepo Drain" (ティポドレイン, Teepodorein?, "Tipo Drain"). In battle, many of Elize's martial artes manipulate Teepo, often using him for physical strikes or energy blasts. These martial artes can be enhanced during Teepo Switching's "Teepo Off" mode, where Teepo hovers around Elize. During Teepo Switch's "Teepo On" mode, Teepo instead attaches himself to Elize and strengthens her spirit artes. Teepo is also able to drain HP and TP from enemies under specific circumstances through Teepo Drain, which is depicted in story as draining energy and Teepo's equivalent to eating. 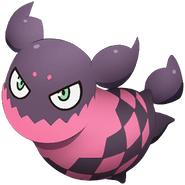 Cut-in image for Scary-Go-Round in Tales of Xillia 2. 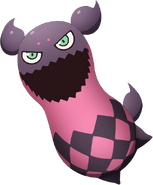 Cut-in image for Infernal Crescendo in Tales of Xillia 2.