Start a Wiki
watch 00:58
Tales of Berseria - Character Trailer: Oscar & Teresa
Do you like this video?

Teresa Linares (テレサ・リナレス, Teresa Rinaresu?) is a major antagonist in Tales of Berseria. She is a praetor-rank exorcist of the Abbey and the half-sister of Oscar Dragonia.

Early Life and the Abbey

Teresa was born out of wedlock by the head of the Dragonia family, aristocrats with ancestral ties to the Asgard royal lineage, and a woman lacking in what can be considered high standing. Teresa's mother died at some point, and her father's wife refused to care for her, so she served as a maid to the family rather than being a part of it. It was Oscar who saw Teresa as his sister and treated her like family, the only light in what she claims were "dark, lonely times" for her. Prior to the events of the story, Oscar joined the Abbey to strengthen ties with it and his family, Teresa following in his footsteps.

The two eventually achieved the title of "Praetor", of which there are only around 100 in existence; furthermore, Teresa and Oscar are both considered consul-ranked praetors, the very highest in terms of combat and leadership. Teresa was hailed for her powerful artes, while Oscar held a high standing in swordsmanship. At the beginning of the main story, Teresa is governing Hellawes in Northgand, while Oscar is sent on a special mission to the prison island Titania. Teresa's governing of Hellawes is mostly met with praise, as the people who acknowledge her strict demeanor, nonetheless both admire and appreciate the stability she provides the city.

Teresa first encounters Velvet Crowe and her crew early in the story, shortly after Velvet's escape from Titania, where she greatly injured Oscar. Once Teresa learns that it was Velvet who caused the riot at Titania, she uses Magilou to lure Velvet and Rokurou Rangetsu, another escaped prisoner, out. Magilou, who likewise escaped with Velvet and Rokurou, is held in the center of town by Teresa while Velvet and Rokurou team up with Dyle, a local daemon who has himself caused a stir and is looking for help, in setting a storehouse of flamestone ablaze. This happens immediately after Velvet and Teresa's exorcists clash, allowing a window of escape. Dyle readies the group a ship while the town attempts to deal with the fire.

Teresa, however, catches the group at the pier and engages with them in combat, using two malakhim she calls "Number One" and "Number Two" to aid her in battle. Defeated, Teresa commands Number Two to blow himself up as a final tactic, but Velvet thwarts this by kicking him aside and then going for Teresa. The exorcist praetor Eleanor Hume then steps in, however, and knocks Velvet back. With few options, Velvet seizes the boy called Number Two and commands him to knock Teresa and Eleanor back. The boy, detecting an order, does so, and the group makes their escape on ship with Dyle.

For the Sake of Her Brother

Teresa is seen briefly again at The Empyrean's Throne, along with Oscar and Melchior Mayvin, as they witness Velvet and her crew take on Artorius Collbrande, only to be fended off by the power of Innominat. Later in the story, as a result of Teresa's failure in Hellawes, she is thereafter removed from governing the city, which results in it falling into chaos as the Abbey struggles to deal with Velvet's crew capturing therions across the land. She is seen again at The Empyrean's Throne when Artorius bestows upon Oscar access to a newly developed arte with powerful capabilities. Teresa, entering without permission, is met with the highest men of the Abbey's order failing to take her seriously when she expresses concern for Oscar's safety.

Oscar consoles his sister while Shigure Rangetsu makes light of the situation. Although Melchior states that they will deal with Teresa after sending Oscar off, Artorius decides to handle the matter immediately, removing her of her exorcist powers by confiscating her remaining malak, Number One, as it has been deemed he holds untapped potential. As such, he is transferred to Melchior. While Oscar continues to comfort Teresa, he ultimately leaves to fulfill his duty despite Teresa's pleas, knowing she will be reinstated as an exorcist once he completes his mission. Artorius, Melchior, and Shigure then leave as well, and Teresa is left alone at the throne, where the seal reacts to her, a sign that she is receptive to Innominat's power.

Teresa refuses to accept Oscar risking his life and sets sail on an exorcist ship with a small crew only to be plagued with the corsair's scourge and forced to send out a distress signal. Velvet's crew comes across the ship, where Teresa explains the situation and offers her assistance in preventing Oscar from risking his life. In turn, Velvet's crew will get the therion they are after, which Oscar is guarding in the Baird Marsh, anticipating Velvet's arrival. The group offers Teresa and her exorcists an antidote and agrees to her plan.

Tragedy at the Earthpulse

Teresa accompanies them through the ruins of an ancient kingdom to reach Oscar at the earthpulse point. She shares some intimate moments with Number Two, now known as Laphicet, a malak who has since discovered his voice and free will. Teresa is shocked that malakhim are capable of the emotions she sees in Laphicet, and she agrees to call him by his new name as to not "rock the boat". She also takes a beetle, which fascinates the young malak, off a tree for him, witnessing for herself his excitement and how it reminds her of how Oscar was as a child. She confesses that he used to go around catching bugs as well, and that she would help him reach the ones he could not on his own.

When the group reaches Oscar and the therion, Velvet commands Oscar to drop his weapon as she holds a blade to Teresa's neck in a feigned hostage situation. Oscar begins to comply but then hurls his sword at Velvet, forcing her to block it, and Teresa uses this opportunity to run behind Oscar, where she strikes him in the head and renders him unconscious. Velvet then commands Teresa to take Oscar and leave, but she refuses, stating that it will reflect "badly upon him". Knowing she is receptive to Innominat's power, she fuses with the nearby therion and becomes one herself, engaging the group in combat.

Defeated, she is once again comforted by Oscar, who reminds her of their bond despite her attempts to avoid eye contact with him, having assumed a therion form. She inevitably submits to him, however, and he tells her he will handle the rest. After unveiling the powers of armatization against the group, he loses control and launches himself at Laphicet, to which Velvet responds by killing him. Teresa, stunned at her brother's death, emotionally recounts their relationship and how innocent Oscar was, giving her earrings intended for his fiance for her birthday because they were meant for the "woman he cares about most". This woman was her.

Teresa's words penetrate Velvet's mind and rationality as her haunting memories flood inside her head until Teresa screams and flies toward her, prompting Velvet to release her daemonic hand and kill her as well. In Teresa's final moments, she resumes her human form and cries near Oscar's body, consoling the lifeless corpse before she herself dies, her hand falling on his. The incident greatly affects Velvet, having mirrored Artorius killing her own little brother before her eyes. At the end of the story, Teresa is reborn as one of the four Empyreans, Amenoch.

Teresa has long, premium-blond hair, light skin, and green eyes. She is tall and carries an air of refinement with her, the outfit she dons consisting of the standard exorcist colors. She wears an extravagant dress and long, armored heels. Teresa's frigid personality seemingly makes her a standoffish person with a warm spot only for Oscar. Although she is not necessarily cruel, the cold air surrounding her often makes others question her compassion. Her love for Oscar, however, shatters all such assumptions, as she is shown to hold him the most dearest to her heart, above all else. With no family to care for her but him, Teresa relentlessly looks after and cares for him, to the point that she risks her own life simply so that he will not risk his.

Teresa's relationship with Oscar is, at times, depicted as more than familial love. Although the romantic implications are never specifically stated, Teresa is revealed in the story to be receptive to Innominat's power, therefore yielding a type of malevolence. She takes the role of "lust" via fusing with the succubus-type therion named Dis, a role in itself defined by lust due to the nature of a succubus. Teresa would not have been able to accomplish this without herself yielding lust, and despite being a half-sibling born out of wedlock, the love is nonetheless defined by incest, spurring the lust.

In battle, Teresa fights alongside the aide of her two tethered malakhim, Number One and Number Two, while she herself uses a staff to perform martial artes of varying elements. Her only malak arte is Final Embrace, and her Break Soul is Northern Lights (ノーザンライト, Noozanraito?, "Northern Light"), a powerful attack that encompasses a large radius around her. While fighting as a therion, she fights using a spear and utilizes a variety of Fire-elemental martial, hidden, and malak artes. Her Break Soul in this form is Screw Driver, and her mystic arte is Violent Mix, an arte fueled by her vengeance for Oscar. 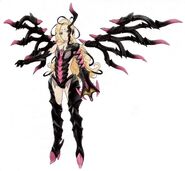 Cut-in image for Tales of Berseria.