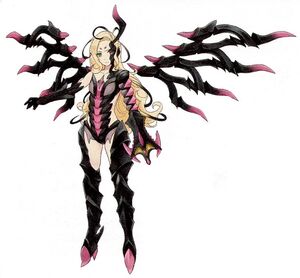 A therion (喰魔, kuuma?, "consuming demon") is a type of daemon in Tales of Berseria. These daemons feed off other daemons and provide the Empyrean Innominat with power.

Those receptive to Innominat's power are capable of being transformed into therions. The highest-ranked members of the Abbey are fully aware of this fact and make it their mission to imprison innocent people, and sometimes animals, in certain earthpulse points in order to feed Innominat and awaken him. These therions serve as the mouths to Innominat, and he requires eight different types of malevolence from these mouths in order to fully awaken: hatred, despair, greed, conceit, obsession, lust, cowardice, and selfishness. Throughout the story, the protagonists encounter and retrieve the Abbey's imprisoned therions in order to prevent Innominat from awakening.

When transformed into a therion, a person submits to the malevolence corrupting them, identically to that of a daemon. In addition, they feel an insatiable hunger that prompts them to feed off daemons, often unaware of their actions. The protagonist Velvet Crowe is a therion, having been corrupted during the Advent three years prior to the story, and although she retains much of herself, the two types of malevolence she possesses, hatred and despair, are amplified and bred as the story progresses. Other therions, such as Kamoana and Medissa, act in a blind rage before being subdued through battle. In their cases, a full body mutation is evident, while Velvet's mutation is restricted to that of her daemonic left arm.

The below table provides a list of therions and their held locations.