Tiberius first makes an appearance in Moreau, speaking to a crowd of townspeople about protecting Aquaveil from the kingdoms of Seinegald and Phandaria until he notices Leon Magnus, having been informed by Lydon Bernhardt of the group. He then orders his guards to seize them, prompting a chase through the city until Karyl Sheeden intervenes and saves the group by hiding them in the nearby inn while he distracts their pursuers. After the group infiltrates Moreau Castle to save Fayte Moreau and his wife, Leianna, from Batista Diego, Fayte lends Karyl and the group a ship to Terazzi so that they may confront the tyrant who has been terrorizing the region.

Onboard the ship to Terazzi, a conversation between Karyl and Fayte reveals that Tiberius killed a woman named Eleanor, who was a childhood friend of Karyl and Fayte. When the group arrives in Terazzi, they find the city seemingly vacant due to Tiberius's forceful reign over the people. Upon infiltrating Tiberius's castle and reaching the large throne room, the group finds Tiberius with Lydon, whom they have been pursuing ever since he stole and fled with the Eye of Atamoni. The group then fights Tiberius, and Lydon escapes on a Flying Dragon during the action. Defeated, Tiberius claims that Lydon has fled to Phandaria before challenging Karyl to a duel, to which Karyl agrees. 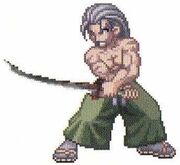 Before the duel begins, Tiberius questions Karyl's intentions, mentioning Eleanor and the power that once belonged to Karyl's father. Karyl responds by claiming to be acting as an ally of the group, asking to borrow Stahn Aileron's Swordian, Dymlos, before Leon tells Karyl to use Chaltier and lends the Swordian to him. In a swift clash, Karyl overpowers Tiberius with his expert swordsmanship, and Tiberius dies shortly afterward, praising Karyl's technique with his final words. Karyl then joins Fayte and the others outside as the townspeople rejoice Tiberius's death, parting ways with the group as they head to Phandaria in pursuit of Lydon.