Aselia Wiki
Register
Don't have an account?
Sign In
Advertisement
in: Tilkis Barone, Tales of the Tempest characters, Protagonists
English

Tilkis originates from a small country far from Areulla known as Senshivia (センシビア, Senshibia?), where he is the prince heir to his father, King Aspic Barone (アスピス・バローネ, Asupisu Baroone?). In order to investigate a mystery occurring in his country, he travels with his bodyguard, Forest Ledoyen, to the capital city of Areulla, Janna. Within the Black Forest on his way to the capital, he meets with Caius Qualls and Rubia Natwick. He handles a large sword skillfully and is very wise. As the protagonists head out to confront King Areulla VIII, he asks Arria Ekberg if she wishes to come to his country with him. At the end of the story, she accepts his request.

Tilkis fights using a long sword, capable of swinging it with ease.

Status image in Tales of the Tempest. 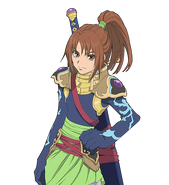