Tison (ティソン?) is a member of the Hunting Blades guild in Tales of Vesperia.

As a member of the Hunting Blades, Tison shares a deep hatred for all monsters. He is shown alongside Clint and Nan in Caer Bocram, where he fights against the Dragon Rider. In the process, the blastia is destroyed, and a monster is released, causing Yuri Lowell and his companions to fall below. Tison later appears in Nordopolica while the Hunting Blades are seeking to exterminate the monster holding the Duce captive, only to discover that the Duce was the "monster". He often resorts to force on the reasoning that anyone helping monsters "doesn't deserve to be considered a person", such as when he and Nan fought against Judith and the rest of the party in an attempt to kill Ba'ul.

Tison's Hunting Blade attire includes half-cut sleeves, boot-like sandals, and tip-less gloves revealing sharp, magenta fingernails. Like Clint, Tison is obsessive about monster hunting. He views all monsters to be evil, including the Entelexeia. He often resorts to force with the reasoning that anyone helping a monster "doesn't deserve to be considered a person", such as when he and Nan fought against Judith and the rest of the group in an attempt to kill Ba'ul. His hood usually covers his head and the majority of his face, even in battle. An exception to this is when he is fought in the Nordopolica Coliseum during the "80-Man Melee", where his hood is completely removed. His mystic arte cut-in is also modified to reveal his face during this time.

Tison lacks any spells, relying solely on his rapid, close combat techniques and greater agility. When fighting, his arms become more flexible and flop around, stretching like bungee cords. His attacks are often quick and aggressive, in which he uses his fingernails like claws, and the majority of his artes consist of a flurry of punches and kicks that leave little opportunity to counter.

Cut-in image without hood for Dragon Blade: Infernal Lord in Tales of Vesperia.

Artwork for Tales of Vesperia. 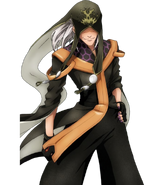