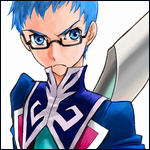 The following is a list of artes that are available to Hubert Oswell in Tales of Graces. All artes and features that are exclusive to the PlayStation 3 version of the game are highlighted with a gray background.

Altered artes are available after obtaining the appropriate "altered arte" (術技変化, jutsuwaza henka?) skills, learned from the adept titles associated with each arte. These attacks are performed by holding down the "Burst Artes" button while using any arte in an altered arte chain, which will then execute the next arte in the chain. If the "Burst Artes" button is held down through the duration of the altered arte, the next arte in the same chain will be activated if the CC requirement is met and the appropriate "altered arte" skill is available for that arte.

The altered arte chain can be initiated at any point in the chain without requiring previous artes within the chain to be activated. The chain will end prematurely if the "Burst Artes" button is released, if there is no CC remaining to continue the chain, or if the character is hit and staggered. Altered artes do not require the succeeding arte to be learned. Using altered artes will not contribute to arte usage counts if the arte has not been learned, however.

Accelerate Mode is activated by pressing the

button when the Accelerate Gauge is filled to at least 50%.

is used to activate mystic artes. Combo-based titles allow the mystic artes to be used outside of Eleth Burst, but they can be activated without requiring the specified combo hits while that mode is active.