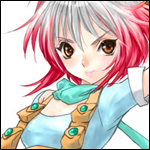 The following is a list of artes that are available to Pascal in Tales of Graces. All artes and features that are exclusive to the PlayStation 3 version of the game are highlighted with a gray background.

Pascal's first and second tier elemental spells each have special skills learned through titles associated with those spells. While casting spells, the player has the option to hold the "Burst Artes" button to delay casting after the chant time has passed. After learning the proper skill, if the "Assault Artes" button is pressed while casting is delayed, the next tier spell will begin chanting, and the time spent chanting the previous spell goes towards the chant time for the next. On the Wii version, however, this still requires the full CC cost for the new spell, resulting in a higher cumulative cost for each successive tier. The PlayStation 3 version requires only 1 CC to start the next tier spell.