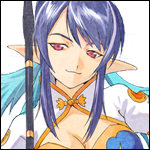 The following is a list of artes that are available to Judith in Tales of Vesperia. All artes that are exclusive to the PlayStation 3 and Definitive Edition versions of the game are highlighted with a gray background.

Burst Artes can be activated only while Over Limit mode is active. The burst arte duration, damage, and effects are increased with Over Limit levels, with maximum effects at Level 3. Similar to altered artes, burst artes can be "altered" if the correct skills are equipped. However, these elemental burst artes cannot be learned separately. All burst artes are activated by holding the "Artes" button during any arcane or altered arte. Additionally, hold the left analog stick while activating any burst arte to send Judith downward.