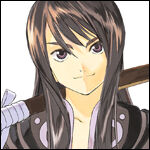 The following is a list of artes that are available to Yuri Lowell in Tales of Vesperia. All artes that are exclusive to the PlayStation 3 and Definitive Edition versions of the game are highlighted with a gray background.