The Turtlez (かめにん, Kamenin?) are a recurring race in the Tales series. They are turtle-human hybrid creatures specializing in trade.

Regardless of their gender, Turtlez wear yellow robes, their sleeves modeled after turtle legs; large brown turtle shells on their back; and a yellow hat resembling a turtle. Their speaking methods are intentionally bizarre and accented, slightly changing the pronunciation and spelling of many words to include "z" at the end. Turtlez specialize in trade, often offering their services outside of towns, mainly in dungeons. It is often discussed by the group what exactly they are; in Tales of Berseria, it is pondered if they are a kind of malakhim, but the White Turtlez dismisses the idea, stating that "turtlez are turlez".

Artwork for Tales of Graces. 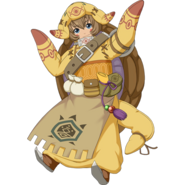