Tytree Crowe (ティトレイ・クロウ, Titorei Kurou?) is one of the protagonist from Tales of Rebirth. He is a worker in Petnadjanka who cares deeply for his big sister and has grand ideals regarding racial equality. Hot-blooded Tytree uses a hand crossbow in combat. He can attack at long range with his crossbow, but Tytree is hardly defenseless in close combat. He has a varied selection of martial arts techniques at his disposal, including a number of kicks that serve him well when the enemy closes in. Tytree uses the Force of Wood.

Tytree is born in Petnadjanka, being the second son of his family. He has a big sister named Selena Crowe, who he completely adores, to the point of bordering "sister-complex". Ever since he is a little boy, Selena has taught him the virtues of justice and helping those in needs, as well as racial equality, a lesson Tytree took very well at heart.

When Tytree was 16, during the Dusk of Ladras, he awakened Force of Wood inside him. It is not known what was the effect when he awakened it, but one year later, Petnadjanka was visited by two of the Four Stars of Calegia, Saleh and Tohma, demanding the town's most beautiful girl. The Petnadjanka factory manager attempted to trick the two by offering his daughter. However, Saleh was not fooled and took Selena away. Angered that he could not protect Selena and the very sight of her being taken away from him crushes Tytree so hard that his Force goes berserk and envelops the whole factory in plants. It takes Veigue Lungberg, Mao, Eugene Gallardo, and Annie Barrs to finally calm him down.

Devastated with his actions, Tytree tries to make amends by forcing himself into Veigue's group. After all, he is also seeking the Four Stars to rescue Selena. Being open-minded and hot blooded puts him against odds with Veigue's taciturn personality, but they get along well enough. They are later joined by a defector from the Four Shields, a Half named Hilda Rhambling. Tytree finally saved Selena in the town of Babilograd, but decided to stick with Veigue further until he rescues his childhood friend Claire Bennett. Selena lets him off, saying that if Tytree chose to go home, she would never forgive him. The team made their way to the capital Balka to stop Queen Agarte Lindblum in carrying a ceremony which involves Claire. On the way, they were stopped by both Saleh and Tohma, who they defeated soundly. Tytree's speech completely devastated Saleh that he will not accept such views. Later, Tytree participates in the battle to defeat the awakened Geyorkias. After the battle, Tytree returns to work in Petnadjanka.

Soon after, Tytree was visited by Veigue, Annie, and Claire, who informed him that Eugene is calling them out. When he arrived there, he was shocked that Eugene actually wanted them to kill him. Mao explained that after the battle with Geyorkias, Eugene became prone of going berserk and attacking anyone in sight. The group headed to Razilda to find a cure, but Tytree now witnesses firsthand that something is wrong with the world: the hatred between the two races are getting more severe. After reuniting with Hilda, they find the cure and gave it to Eugene, after calming him down from another berserk fit. The team decided to investigate Razilda's "Power of Darkness", which turns out to be a Sacred Beast, servant of Geyorkias, this one called Eephon. And the person he chose to inherit the power was Tytree. But, to be proven worthy of his power, Eephon gave Tytree a trial in form of an illusion.

The illusion involves Tytree returning to Petnadjanka, and to his shock, every Huma, Selena included, are mistreating the Gajuma thanks to racist thoughts. At one point, Tytree was fed up and stood up against a group of mistreated Gajuma. However, the Gajuma later retaliated by killing Selena, and Tytree was blamed for saving the Gajuma in the first place. Although devastated, Tytree decided to stay on hold on Selena's old teaching that every race is equal. His persistence eventually did good on him and it brought him to the final test of Eephon's trial: to best him in combat. Tytree prevailed and received his power. Along the way, he found out that Claire and Agarte has switched bodies in the wake of Geyorkias's defeat.

After resurrecting the rest of the Sacred Beasts, the thoughts of hatred that consumed the world vanishes. However, the conflicts caused by it did not vanish. This started to take toll on Veigue's emotions that his Force eventually went berserk, but the team calmed him down. The next time Tytree saw him, Veigue rashly blamed Agarte for all the misfortunes that befell on Claire. Angry at him constantly closing his heart, Tytree demands him to visit him on the beach. When Veigue arrived there, Tytree punched him on the face and berates him for always closing himself and not letting other people understand or share his pain. Veigue punched back and both of them entered a fist-to-fist brawl. It ends with Veigue finally calming down and starts opening himself.

It is later decided that they have to revive Geyorkias again as he held the answer to the recent events, cities being destroyed due to the swelling negative emotions. Geyorkias reveals that the negative emotions gave birth to Yuris, which could destroy the world. The team managed to destroy it with the help of Agarte, who unfortunately died due to fatigue. After the battle, Tytree returns to Petnadjanka to resume his daily life.

Tytree is as masculine as he is determined in whatever it is he may be doing. His bold personality is accompanied by his charismatic appearance, donning a largely green outfit with a breastplate, belts, and ranger chaps. He wears an ornate gold headband nestled in his long green hair and wields a crossbow on his left glove, which, in addition to martial artes, serves him in battle. Personality-wise, Tytree is adventurous and headstrong, though this sometimes results in persistent stubbornness, unyielding to those with a negative outlook on the situation at hand. His confidence and positivity is ultimately what helps Veigue overcome his gloomy state after Claire's disappearance in Minal, and the two thereafter develop a stronger bond.

Status image in Tales of Rebirth. 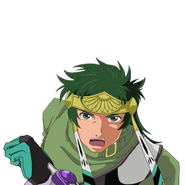 Cut-in image for Tales of Rebirth.