Undine (ウンディーネ, Undiine?) is the Spirit of Water, also representing one of the four cardinal elements of the Tales games. Undine has appeared in several games of the series as characters and cameos, and she is able to be summoned through the Undine arte. Undine is opposed by Efreet, the Spirit of Fire, and in certain games, Volt, the Spirit of Lightning. In Tales of Rebirth, Undine is replaced by Shaorune, the Sacred Beast of Water. In Tales of Graces, she is replaced by the Spirit Cyandine. In Tales of Phantasia, she appeared as a sword-wielding sprite, but as the series progressed, her appearance became more toward that of a merperson. In early games, Undine was pronounced with an "e" at the end, but in more recent titles, the "e" became silent.

Undine makes her first appearance in Tales of Phantasia as a Spirit. She appears as a tall woman wearing blue flaps and cloth over her body, wielding a sword. Found in the Limestone Cave, she is one of the first four Spirits the party must face before they can meet Maxwell, the "Lord of the Four Elements". She initially fights the party because they awoke her, though after defeat, she assents to making a pact. It is through her power that the party is able to reach the sunken city of Thor. Undine requires the "Aquamarine Ring" to forge a pact, granting Claus F. Lester with the power to summon her in battle with the Undine arte. When fought, Undine primarily acts as a caster. She brings into battle her various monsters and proceeds to cast various Water-element spells, such as Ice Needles, Ice Wall, and Ice Tornado. She can also strike enemies with her sword and send a slicing wave from her blade across the screen.

Undine appears in Tales of Phantasia: Narikiri Dungeon as the Spirit of Water and one of the twelve Spirits that must be fought during the Ordeal of Spirits. She is found on the final level of the Cave of Water in AC. 4203 and is the boss of the dungeon. Upon defeat, she teaches Mel and Dio the heart of water: Presence of Mind (へいじょうしん, heijoushin?).[1]

Undine appears in Tales of Phantasia: Narikiri Dungeon X as a Spirit. In the story, Mel and Dio must collect her essence to save Vahalla City. Undine is found on the bottom floor of the Limestone Cave in AC. 4203 and is the boss of the dungeon. Upon defeat, Mel and Dio collect her essence. After completing the first quest of the game and obtaining the "Aquamarine" jewel in Euclid, she may be challenged again in order to allow Claus to summon her in battle, as well as allow him to use his mystic arte, Tetra Leader.

Undine appears in Tales of the World: Summoner's Lineage as a unit Fulein K. Lester can summon.

Undine appears in Tales of Destiny as a special attack that can only be summoned through the consumable item "Wendiene", a clear mistranscription of Undine's own name, as it bears the same katakana in the Japanese version, which is described as an ancient weapon capable of calling forth the water spirit.

Undine makes a cameo appearance in Tales of Destiny 2 in the mystic arte Aqua Rimms.

Undine appears in Tales of Eternia as one of the Greater Craymels and one of the Primary Craymels of Inferia. The Water Craymel governs the use of all Water-elemental spells. Undine makes her home in Undine Stream. With her steely personality, she is the first Greater Craymel encountered and tests their will. It is her power which lets the party survive the intense heat of Efreet Gorge, and when Efreet refuses to help, she forces him inside the Craymel Cage. Undine can be summoned through the Undine arte. In battle, Undine fights using her trident. Her main attacks are her Spear of Baptism, which sends a stream of water across the screen if unblocked, and Subterranean Divide, in which she sends out a small-ranged projectile. She can also cast Spread, which, on higher difficulties, can extend into Maelstrom as her HP depletes.

Undine, the Maiden of the Mist, appears in Tales of Symphonia as one of the Sylvaranti Summon Spirits. She appears as an amphibian-like form, with completely blue skin and "clothes" that seem fused to her skin. Residing on a small island known as Thoda, famous for its geyser, she is the Summon Spirit of Water. She is able to be summoned through the Summon: Water arte, which will display Undine's name after the arte's name. Undine's main method of fighting is casting Spread. She will also strike with her sword if possible, and she can cast Aqua Edge without a casting time.

Undine appears in a Hot Spring scene, where Sheena Fujibayashi summons her to send water toward Lloyd Irving and Emil Castagnier after they are tricked by Zelos Wilder. In reference to her position as the Summon Spirit of Water, her name is attached to monster grimoires that teach Water-elemental artes: "Undine's Whisper", which teaches First Aid, "Undine's Affection", which teaches Heal, "Undine's Charity", which teaches Recover, and "Undine's Tears", which teaches Splash.[2]

Undine is mentioned in Tales of the Abyss as the aggregate sentience of the Fourth Fonon, the Fonon of Water. Her name is used to represent the fourth day of the week, Undineday, and the third and tenth months, Undine Decan and Undine Redecan respectively. In addition, Jade Curtiss can obtain a spear named "Undine".

Undine appears in Tales of Vesperia as a Spirit. Here, the Entelexeia, Belius, is inadvertently turned into a Spirit after Rita Mordio attempts to control Estelle's powers using Belius's apatheia. The Spirit has control of all waters, and asks Estelle to name her. Estelle promptly names the new spirit "Undine", meaning "Ruler of the Waters". Much like Belius, Undine has much support for the humans and, when the four Spirits converse, speaks the most for them. In the PlayStation 3 port of the game, Undine appears during Estelle's mystic arte, Ultimate Elementia, where after Sylph performs her cyclone, she unleashes a tidal wave that drowns her foes.

Undine appears in Tales of Xillia as one of the Four Great Spirits under the personal control of the Lord of Spirits, Milla Maxwell. She and the other three are eventually freed and rescue Milla's soul from reincarnation. However, as a result, Milla lost her memories. Surprised by the amnesiac Milla's kindness and wanting them around, they eventually assist her in defying Maxwell's orders. At the start of the events of the story, Undine is imprisoned within the Lance of Kresnik. She reappears in Tales of Xillia 2 as a helper of Milla, acting faithfully under her command.

In both the Undine and Aqua Limit mystic artes in Tales of Crestoria, Undine takes the appearance of a long-haired, clothed maiden wielding a spear, all made of pure water. 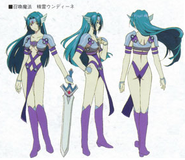 Sprite in Tales of Phantasia for the Super Famicom.

Sprite in Tales of Phantasia for the PlayStation. 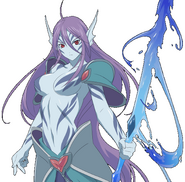 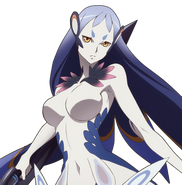