View source
watch 02:40
World of Warcraft: Dragonflight - The Loop
Do you like this video?
Play Sound

"Van" redirects here. For the character in Tales of Berseria, see Van Aifread.

Van Grants (ヴァン・グランツ, Van Gurantsu?), birth name Vandesdelca Musto Fende (ヴァンデスデルカ・ムスト・フェンデ, Vandesuderuka Musuto Fende?), is the Commandant of the Oracle Knights within the Order of Lorelei, serving as the commander of the God-Generals. Van is the primary antagonist of Tales of the Abyss. He is also Luke's sword instructor and mentor. In the Ancient Ispanian language, his birth name means "one who would seize glory" (栄光を掴む者, eikou wo tsukamusha?).

Van was born in N.D. 1990 on the island of Hod, son of Lord Fende and Farmyriarica Satis Fende. When Van was young and his mother was pregnant with his sister, Mystearica Aura Fende, he was forced to destroy the land of his birth, Hod, by being attached to a machine that generated an artificial hyperresonance. Van was able to survive Hod's destruction, alongside his mother and unborn sister, by singing a Fonic Hymn. He fell to the Qliphoth, where he eventually reached Yulia City, and was later adopted with his sister by Teodoro Grants. Van later discovered this fate was predicted in Yulia Jue's Score, which ignited his hatred of it and sparked his attempts to overthrow it. Since the creation of replicas was not predicted in the Score, and thus, they were not bound by it, his goal became to replicate the world and everything in it, while destroying all originals. To do this, Van knew he had to obtain a position of power to gather followers who shared his ambition. He joined the Order of Lorelei, the organization that ensures that the world follows the Score.

While rising in the ranks of the organization, he presented himself to be older than he actually was so that people would be more likely to look up to him, rather than be jealous of his high rank. He gathered others who held the potential for the same hatred of the Score that he had, installing them as the leaders of various units within the Oracle Knights, the military arm of the Order of Lorelei, designating them as the God-Generals. When Asch was still known as Luke, he had gained a lot of trust in Van, and he agreed to run away to Daath with him one day. Instead, Van kidnapped Asch and had him replicated, claiming to Asch's parents that the replica was the real Luke so that he would take Asch's place. Van needed Asch for his hyperresonance, as it could be used to destroy all the Sephiroth Trees, which held the surface above the Qliphoth. The new Luke was to die in Asch's place at Akzeriuth, which is something that never happened.

After the disaster at Akzeriuth, Van eventually encounters the party at Belkend. There, he reveals his plan of replicating the entire planet, since it became apparent that replicas existed outside Yulia's Score. After the encounter, he finds the party again in the Meggiora Highlands, where he tells Tear to stop using the passage rings, as they insert miasma-infected fonons into her body. At that moment, Asch comes and attacks him. However, Van effortlessly defeats him with a single blow, leaving Asch injured. Van then tells Tear he will be waiting at the Absorption Gate and that the next time they meet, he would not hold back, even for her.

When Luke and the others come to the Absorption Gate to stop Van, he is immediately displeased that the "replica" Luke is here and not Asch, with whom he wanted to start his plans. Luke and Tear try one more time to talk him out of his insane plan to no avail, and the party ends up fighting Van deep within the Absorption Gate. He is defeated after he plants his sword into the ground and prepares to fall to his death, stumbling off the edge of the platform on which they were fighting. Afterward, Luke went on to begin the safe descent of the Outer Lands with additional help from Asch, who was at the Radiation Gate at the time.

One month later, Luke and the others discover that Van had survived their last battle, along with each of the God-Generals. They resume their goal of overthrowing the Score, culminating in the replication of the lost city of Eldrant, one of the major cities of Hod before Van destroyed the region in his youth. The party confronts Van at the top of Eldrant, where Van reveals that he had taken captive and absorbed Lorelei into his body, using Lorelei's power to bring about his plan to replicate the whole world, populated entirely with replicas.

Throughout the story, it is revealed that until the confrontation at Eldrant, Van thinks of Luke as inferior due to him being a replica. Only when Luke and the party confront Van at the end of the game does Van consider Luke a true human being, since he defeated Asch, his original, in battle. However, Luke has already lost need of Van's acceptance, and is ready to fight him. During the battle, Van is forced to use Lorelei's power at the risk of losing control over the latter, but to no avail. Luke frees Lorelei's spirit from Van's body with his second-order hyperresonance and with the help of Tear, who sings the Grand Fonic Hymn toward the end of the battle. With Lorelei freed from his body, Van dies after saying his last farewell to Tear. His last moments are asking for the forgiveness of his comrades for his failure.

Van practices the Albert style of swordsmanship, which focuses on creating powerful strikes while sacrificing speed and evasion. Van has access to several artes that are learned by his students, Luke and Asch, including Raging Blast and Lightning Tiger Blade, and he can activate elemental FOF Changes at will, without requiring the use of FOF Circles. Van is also capable of casting both Fonic artes and Fonic Hymns, abilities that have been passed down through his ancestry as a descendant of Yulia. Van has access to three mystic artes, known as Imperial Slaughter, Celestial Elegy, and Ancient Requiem. Maintaining the same motif of similarity to his students, his Imperial Slaughter features movements similar to Asch's Rending Saber, while his Ancient Requiem follows the actions of Luke's Radiant Howl.

Despite his status as the primary antagonist in Tales of the Abyss, Van is a fully playable character in Tales of the World: Radiant Mythology 3. He is introduced together with Luke and Asch, reprising his role as their teacher. During one story event, Van, together with the Protagonist and Kanonno Grassvalley, ventures into the first area of the Holy Land of Randgriz, underneath the roots of the World Tree, to uncover the history of the trees of different worlds and Kanonno's origin.

Official concept artwork of Van in his final form. 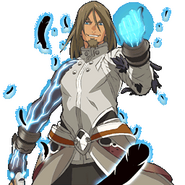 Cut-in image for Ancient Requiem in Tales of the Abyss.