Volt (ヴォルト, Voruto?) is the Spirit of Lightning. Volt has appeared in several games of the series as characters and cameos, and he is able to be summoned through the Volt arte. Volt is opposed by Undine, the Spirit of Water. In most of his appearances, he appears as a floating orb of electricity with eyes.

Volt makes his first appearance in Tales of Phantasia as a Spirit. He appears as a large, black orb of lightning. Found in the Volt's Cave, where the Catacombs once were, the party seeks him out to power the Techbirds. Though the party is unable to understand his speech, he forges a pact and powers up the Techbirds, as well as Arche Klein's broomstick to the same capabilities. Volt requires the "Sardonyx Ring" to forge a pact, granting Klarth F. Lester with the power to summon him in battle with the Volt arte. When fought, Volt primarily acts through lightning and is aided by various monsters. He can use short-ranged ramming attacks, as well as charge himself with lightning and tackle an enemy forward. He can also shoot bolts of lightning across the screen and cast Lightning-elemental spells such as Thunder Blade.

Volt appears in Tales of Phantasia: Narikiri Dungeon as the Spirit of Lightning and one of the twelve Spirits that must be fought during the Ordeal of Spirits. He is found on the last level of the Cave of Electricity in AC. 4354 and is the boss of the dungeon. Upon defeat, he teaches Mel and Dio Ingenuity (ソウイ クフウ, soui kufuu?).[1]

Volt appears in Tales of the World: Summoner's Lineage as a unit Fulein K. Lester can summon.

Volt appears in Tales of Destiny as a special attack that can only be used through the consumable item "Bolt", an alternate reading of his name, which is described as an ancient weapon capable of calling forth the lightning spirit. The Volt of Tales of Destiny appears as an old man wielding a staff.

Volt appears in Tales of Eternia as one of the Greater Craymels and one of the Primary Craymels of Celestia. The Lightning Craymel governs the use of all Lightning-elemental spells. Found in the Ruins of Volt, the party discovers him in pain and barely able to speak. In his thrashing, he attacks the party. Once subdued, Celsius appears and states there is something wrong. Heeding what words Volt can say, the party presses the white switch in the room, which frees him. In gratitude, Volt enters the Craymel Cage. As he is the last Celestian Primary Craymel, this event summons Shadow, who gives the party the sword Excalibur. Volt can be summoned through the Volt arte.

In battle, Volt mainly fights through Lightning-element spells. He uses Lightning, Spark Wave, and Thunder Blade throughout the battle, and on higher difficulties, he can cast Indignation instantly, almost always opening the battle by using it. His basic attacks include a small thunder wave beneath him and columns of lightning that spread to his left and right. When Volt is attacked by a ten-hit combo, he will counterattack with Family Reunion, which causes him to split into many miniature versions of himself and attack the entire field before returning back into his regular form. He also uses this attack on the enemies when summoned by Meredy or Keele Zeibel. 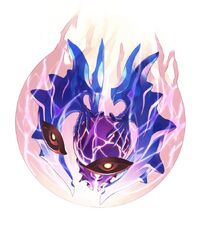 Volt, the Hammer of Godly Lightning, appears in Tales of Symphonia as one of the Tethe'allan Summon Spirits. Appearing in the Temple of Lightning, he is the Summon Spirit of Lightning. Years before the beginning of the story, Sheena Fujibayashi attempted to form a pact with when she was young. Partly because Volt did not speak human language and had no desire to form a pact because of how Mithos Yggdrasill acted against his pact with him, the pact failed and ended up harming many people from her hometown.

Although she is terrified of him now, Sheena meets him again, alongside Lloyd Irving and his companions, in order to gain power to travel between Sylvarant and Tethe'alla. Though the Spirit is tame this time, with help from Raine Sage, who is able to translate Volt's words, it comes at an awful price: Corrine sacrifices his life in order to prevent Volt from killing Sheena. After her adoptive grandfather, the chief of Mizuho, awakens, Sheena states that she and Volt may now be able to become friends. Volt is then used to power the damaged Rheairds. Volt can be summoned through the arte Summon: Lightning, which will display Volt's name after the arte's name. When fought as an enemy, Volt attacks mainly through strike artes that caught lightning to rain down as well as Lightning-elemental spells.

In reference to his position as the Summon Spirit of Lightning, his name is attached to monster grimoires that teach Lightning-elemental artes: "Volt's Melancholy", which teaches Thunder Blade, and "Volt's Whim", which teaches Charge.[2]

Volt appears in Tales of Legendia as one of the Summon Spirits. The Volt in Tales of Legendia appears as a muscular humanoid lacking legs. Volt makes his first appearance at the end of Chloe Valens's character quest as a glowing ball of light only Grune can see. Acknowledging the role the immaturity of the world has on both Grune and his power, he then rests in Grune's urn as a seed, which Grune then plants. At the end of the story, Volt is born from this seed as one of the Summon Spirits bequeathed onto the world. Given his nature in other games, he is associated with the game's Lightning element.

Volt appears in Tales of Xillia as a spyrite. However, because it is not bound to a human, it loses control. This causes power issues within Helioborg Fortress, forcing the party to fight the spirit. After the party defeats Volt, they successfully manage to tether with it in order to free Balan, Alvin's cousin, from a stuck elevator, as well as restore power to the facility. In Tales of Xillia 2, a fractured version of the Volt spyrite is a divergence catalyst. When defeated it speaks of "soul contamination spreading".

Artwork for Tales of Xillia. 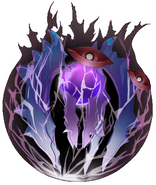