Walter first appears as a bandit trying to kidnap Shirley Fennes. When Senel Coolidge sees him, he instantly attacks him. Their battle is interrupted by Moses Sandor kidnapping Shirley, and Walter flies away. Walter is then seen at the Bandits' Lair kidnapping her again and taking her to the Secret Passage. The party finally catches up with him and fights him for Shirley, but they still is unable to defeat him. After the battle, a pillar falls on him, but the party helps, and Walter leaves after he wakes up.

Walter is not seen again until Senel and his friends try to rescue Shirley at the Waterways. Walter fights most of Vaclav Bolud's troops but gets injured in the process. He hides Shirley and Fenimore Xelhes in secret room in the area and faints there. The party rescues him and Fenimore after Shirley is kidnapped again by Vaclav. After waking, he grabs Fenimore and takes to the skies heading to Maurits's Hermitage.

At Maurits' Hermitage, Walter returns from the Man Eating Ruins in a failed attempt to obtain the "Whisper Crystal". After Senel and friends return from the ruins with the crystal, Walter is appointed the leader of the Sentinel squad in the war. The next day, Walter appears in his regular clothes and goes to the Bridge to lead the Automata to war. When the Nerifes Cannon is shot, he goes to the Bridge's top floor to see if Shirley and Stella Telmes are safe. Walter is the one to reveal to Senel that Stella became the Legacy itself and protected Senel the whole time.

After the war, Walter leads the party to Vaclav's former hideout in response to rumors of Vaclav's surviving forces. This turns out to be a trap set by Walter to make sure Shirley completes her task at the Altar of the Sea. Later, when the party tries to see Shirley at the Altar, Walter blocks them with his Teriques. When Shirley finally becomes the Merines, he obtains more power from the sea and challenges the party to another fight, which the party instantly loses. Maurits commands him to kill Senel, but they are saved in time by a blizzard summoned by the Summon Spirit Celsius.

During the events of Fallen Lands, Walter tries to fight the party at the Ice Monument to stop them from getting their Eres back, the power of the Quiet Nerifes weakens his strength and Shirley rescues him with her Teriques. At Mirage Palace, Walter sees Senel and tells him to leave, but Senel will not leave until he talks to Shirley. Walter, in response, gets angry at Senel and attacks the party, but is defeated thanks to their Sacred Eres. Walter is then weakened and runs with Shirley and Maurits to the Wings of Light.

The party encounters Walter one last time at the Wings of Light where he uses his remaining energy to control the "Royal Automata". The party pleads with him not to do it, but he insists and attacks them. After being defeated, Walter expresses anger that Senel would be the one to be at Shirley's side, a position that Walter has trained his life to fulfill. Senel feels regret about the battle, wishing there could have been another way. During the ending credits of the main quest Walter and Fenimore's burials are being held.

Walter is a cold and arrogant person, as exemplified in his belief of the racial superiority of the Ferines over the human Orerines. He is also extremely loyal to the Merines and sees the association with the Orerines as something that could corrupt her. In spite of his pride, he believes that only he can protect the Merines. Though he frequently acts cold to those around him, he does seem to have a soft spot for his fellow Ferines, as shown when he cheers up Fenimore during the war by asking her to bring the soldiers something to eat when she expresses that she feels useless.

Walter is a master of both Iron and Crystal Eres, performing both in conjunction with each other. Walter's basic attacks are martial arts combos not unlike Senel's, combined with mid-range blasts of energy. He also can cast devastating spells of many elements, beginning small with Flame Cutter and Thunder Blade before graduating to more powerful spells such as Spread and Blizzard. 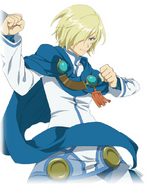