Aselia Wiki
Register
Don't have an account?
Sign In
Advertisement
in: Will Raynard, Tales of Legendia characters, Protagonists
English

Will is the first person who Senel Coolidge meets on the Legacy, and is therefore the first person to join the party. While rather annoyed by Senel's arrogance, and not so fond of him at the start, Will is willing to help Senel save Shirley Fennes. However, after Senel leaves the party, Will loses all trust he had for him, refusing to help Senel until they reach Oresoren Village. Will also acts as a strategist and mediator during the war against Vaclav Bolud, aiding Jay and Maurits Welnes plan the battle. During the next half of the Main Quest, it is revealed he has a strained relationship with his daughter, Harriet Campbell. Will mainly acts as the adult who keeps things in order, or at least attempts to, and serves more as the leader at times.

A trustworthy man, Will has put his Crystal Eres abilities to good use while serving as sheriff of Werites Beacon. While the townspeople call him sheriff, he refuses to accept the title, and insists he is a natural historian. Often strict and sometimes gentle, his experience, leadership skills, and ability to make hard decisions serve the party well. Yet despite all his strengths, he harbors a single, hidden weakness.

Due to being the oldest, Will is seen as more of a parental figure, something Norma Beatty enjoys emphasizing often, as he is the one who punishes or scolds the other party members whenever they do something that annoys him or has nothing to do with the current situation. He is strict when it comes to certain things, but does have a caring side which reveals itself whenever needed.

Will is a versatile character, possessing both offensive and healing spells in his arsenal, as well as a giant hammer to keep approaching enemies at bay. Despite the fact he equips such a large hammer as a weapon, he does not have much use for it beyond normal attacks, and is far more proficient with the magic of Crystal Eres. He has a higher level of intelligence compared to other characters, but this advantage is offset by the equipment the female Crystal Erens can receive. 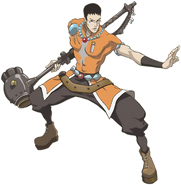 Official artwork for Tales of Legendia.

Official artwork for Tales of Legendia. 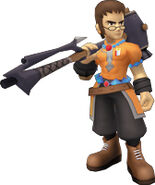 Game model in Tales of Legendia. 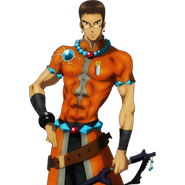 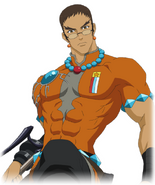