Winona Pickford is a significant supporting character in Tales of Phantasia despite her appearance in only the iconic beginning scene of the game. She is the protagonist of Tales of Phantasia: Katararezaru Rekishi, a light novel centered on the ancestors of characters from the main game.

Winona's story began in AC 4201. At that time, she was the foremost archer in a troupe of traveling performing magicians. She used a collection of crossbows in a sharpshooting act. She excelled at archery but often angered the troupe leader by deviating from the planned performances.

It was in that capacity that Winona first met Edward D. Morrison. Their acquaintance was cordial but she secretly found him annoying. He had a tendency to bombard people with questions and shut out the world around him when he would fixate on something, a "scholarly" personality that irritated Winona. The two would later overcome their personality conflict and fight as comrades.

Winona crossed paths with Dhaos around this time. She would become one of the four warriors who storms Dhaos's Castle during his war with Midgards in AC 4207. In side materials, she plays a larger role and is depicted as wielding a crossbow, but this is changed to a normal bow in the game. In the iconic scene of Winona, Edward D. Morrison, Carol Adenade, and Alan Albane's fight with Dhaos, she is lying on the ground being aided by Carol. Although her fate is unknown, Edward manages to cast Indignation and defeat Dhaos, prompting him to flee through time in order to recuperate.

Sprite for Tales of Phantasia (GBA). 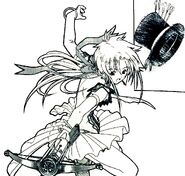