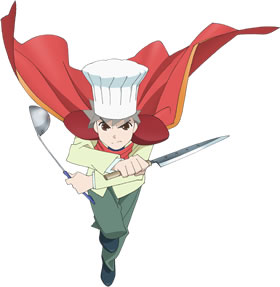 The Wonder Chef (ワンダーシェフ, Wandaashefu?) is a recurring character who appears in many of the Tales games. If found, he gives the protagonists a new recipe to cook, often with the ingredients to cook it as well. Although the Wonder Chef is the master of disguise, able to transform into nearly any object, he is often noticeable for the fact that the objects he chooses to transform into rarely fit into his location's atmosphere or decoration. A keen eye can discover his location, but he can also disappear in a flash of smoke.

The first game to feature cooking, the PlayStation version of Tales of Phantasia, does not feature the Wonder Chef. They do, however, feature what can be considered his prototype: chefs, and in some cases, robots who refer to themselves as "Denizens of the Wonderful World of Flavor" and wear the same uniform. They give the group new recipes, though they do not hide as the Wonder Chef does.

The Wonder Chef himself first appears in Tales of Eternia, where he introduces himself as the "Mysterious Wonder Chef" when discovered. He wears dark clothing covered with a red cape, and atop his head is a classic chef's hat.

Tales of Symphonia expands the role of the Wonder Chef into a sidequest. Appearing with the signature cape and hat, he wears a green uniform and wields a giant fork. When cornered in Meltokio by the Dark Chef, his evil counterpart, Regal Bryant is asked to battle the Dark Chef in a cooking duel, with his victory meaning the Wonder Chef's release. Regal's win nets him the "God of the Kitchen" title, a costume that allows Regal to dress as a chef, though not the Wonder Chef, as well as obtain more recipes.

The Wonder Chef returns in the Symphonia sequel, Tales of Symphonia: Dawn of the New World, though the recipes he teaches the protagonists are only for their monster allies. However, the role of cooking in this game is arguably greater than others since feeding one's monster allies what he or she has cooked is the only way for them to evolve.

Tales of Legendia, with a cooking system focused on baking, replaces the Wonder Chef with the Wonder Baker, Mimi Baker.

Tales of Vesperia sees the return of the Wonder Chef, as well as his transformations. Instead of a cape, he wears a red apron and wields a gold-colored fry pan, as Julio Sven and Caro Orange's costumes do, as well as a ladle. After obtaining all of his recipes, the Wonder Chef reveals himself as part of the guilds and asks them to represent the guilds in a cooking exhibition match at Dahngrest's "Cooking Coliseum". He reveals that the imperial and guilds' chefs have always had competitions, but the recent strengthening of ties has allowed them a public duel. At the match itself, however, the Wonder Chef is impressed by the chosen contestant's cooking and is astounded by Flynn Scifo's dishes' appearances, but he is completely disgusted by the flavor of Flynn's food and leaves in anger.

Tales of Vesperia also pokes fun at the concept of the Wonder Chef. The protagonists can obtain a recipe from someone else, only for the Wonder Chef to run up with the same recipe and be completely ignored by the party, much to his despair. There is also a skit involving the Wonder Chef's existence and posing questions about his chosen method of hiding, as well as about what would happen should the object he disguises himself as be damaged, destroyed, or left undiscovered.

The Wonder Chef appears in Tales of the World: Narikiri Dungeon 2 as a costume for Julio and Caro. The costume is based on the Eternia variant of the Wonder Chef. Their Wonder Chef costumes wield a frying pan into battle and perform special attacks with the frying pan. It also has an upgraded "Gourmet Chef" (あじむしゃ, Ajimusha?) costume.